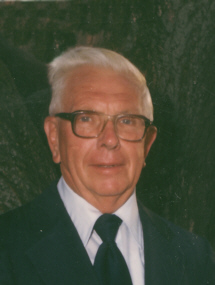 James E. “Jim” Kennedy, who for the past 50 years, has resided at 15061 7th Road in Plymouth, died of natural causes at 8:50 a.m. on Thursday, December 1st, 2005, in Saint Joseph Regional Medical Center, Plymouth. He was 87 years old.
He was born in Plymouth, the son of Thomas N. and Dora V. (Rober) Kennedy. He graduated from Plymouth High School with the class of 1936.
During World War II, Jim served with the United States Army in the Aleutian Islands. He was honorably discharged as a Technician 4th grade.
On August 19, 1948, in Plymouth, Jim and Hope E. Stockman were married. Hope died seven years ago on July 31, 1998.
He was an expert machinist in metal fabrication for Russell Kirkley. He retired in 1980.
A devoted family man, he enjoyed woodworking, gardening and rug weaving.
Jim is survived by three sons, seven daughters, 18 grandchildren and nine great-grandchildren. His sons are: Michael E. Kennedy, Pfafftown, N.C.; Ronald J. Kennedy, Valparaiso, Ind.; and Christopher J. and Nikki A. Kennedy, Knox, Ind.
His daughters are: Joan L. Kennedy, Plymouth, Ind; Marianne and Hank Muller, Walkerton, Ind.; Laura C. and Alan B. Kennedy-Clark, Plymouth, Ind.; Marlene S. Hatfield, Plymouth, Ind.; Joyce E. and Bob D. Rhodes, Plymouth, Ind.; Janet M. and Mike K. Cormier, Plymouth, Ind.; and M. Jennifer Kennedy, Marion, Ind.
A brother, Charles Kennedy of Lafayette, Ind., also survives, together with numerous nieces and nephews.
Jim was preceded in death by his parents, his spouse, a son, Thomas J. Kennedy who died in 1994, four brothers and four sisters.
The family will welcome friends to celebrate the life of Jim Kennedy from 3 to 7 p.m. on Sunday, December 4, 2005, and on Monday, December 5th after 7 a.m., at the Johnson-Danielson Funeral Home, 1100 N. Michigan St., Plymouth. A Rosary will be prayed on Sunday evening at 6:30 p.m. in the funeral home. A Mass of Christian Burial will be held at St. Michael Roman Catholic Church, where Jim was a member, 615 N. Center St., Plymouth, at 11 a.m. on Monday, December 5, 2005. The Rev. Father William Kummer, pastor of the church, will officiate.
Jim will be laid to rest next to his beloved wife in the New Oakhill Cemetery where military graveside rites will be accorded him by the Veterans of Foreign Wars, Marshall County Post 1162.
Gifts in memory of Jim Kennedy may be made to a charity of the donor’s choice.