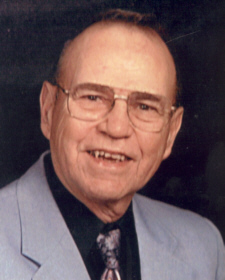 James E. Moore, 81, Plymouth, died in the Bremen Community Hospital at 10:15 p.m. on Tuesday, November 9, 2010 of natural causes.
James was born in South Bend, Indiana on May 29, 1929. He was the son of Marvin F. and Zeffa R. (Conklin) Moore.
On April 14, 1953, he married Mildred Huff in the Trinity United Methodist Church, Plymouth.
He graduated from Tyner High School and went through his apprenticeship for sheet metal and became a journeyman sheet metal worker. He was a member of Local #20 for 46 years serving as business representative and vice president before retiring in 1990. He also served as a trustee for the AFL-CIO. He was a member of the Tyner Odd Fellows Lodge, twice serving as Noble Grand.
He loved to fish, bowl and was an avid spectator at local sports events. James enjoyed farming and one of his hobbies was restoring old Allis-Chalmers tractors.
James is survived by his wife, Mildred Huff Moore, Plymouth, and by their five children: Sue Ann (Ron) Johnson, Bremen, IN.: Jerry I. (Trenda) Moore, Plymouth: Jenny Moore, South Bend, IN.: Thomas J. (Karen) Moore, Plymouth, IN.: John E. (Jeanna) Moore, Pierceton, IN.
Seventeen grandchildren and thirty-six great-grandchildren, a sister, Marvene Melton, Mishawaka, IN., and a brother, David O. Moore, Lakeville, IN., survive as well.
James was preceded in death by a brother, Bill E. Moore and a sister, Mary E. Hetzel.
Friends are invited to visit with James’ family from 4 to 8 p.m. on Friday, Nov. 12 at the Johnson-Danielson Funeral Home, 1100 N. Michigan St., Plymouth, IN.
A memorial service will be given by the Tyner Oddfellow Lodge at 8 p.m. following visitation in the funeral home.
Funeral services for James will be on Saturday, Nov. 13, at 10 a.m. in the Tyner United Methodist Church. The Rev. Michael Dixon will officiate.
Burial will be in the Morris Cemetery on U.S. 6, west of La Paz, IN.
Memorials in James’ name may be made to the Tyner United Methodist Church.