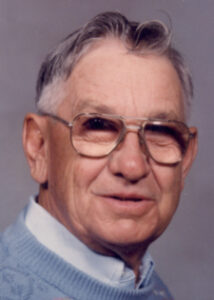 James E. Wade, 87, a resident on 9C Road in Plymouth for the past 46 years, passed away at his home on Friday, February 03, 2012 at 3 a.m. of natural causes. Jim has been involved in farming nearly his entire life, and, since 1939, he and his family have lived on two farms in West Township. There was little doubt that he dearly loved his livestock with the care he provided them.
Jim was born on February 20, 1924 in Plymouth, the son of Claude E. and Gladys (Good) Wade. He attended LaPaz Community School until his family moved to Plymouth – West Township where he graduated from West High School in 1942.
At the age of 16, he started in the trucking business with his father during the summer months. Following his graduation, he began driving full time for Wade & Sons Trucking, a family business. In 1964, Jim purchased the company and ran it until 1981.
His first farm was purchased in 1949 and featured one of the few round barns in Marshall County, now owned by the Clement Fox Family. There he began his herd of Hereford cattle. After retirement from trucking, he continued to dig and spread marl for local farmers.
He served on the West Township Advisory Board for over 20 years, the R.E.M.C. Board for 6 years, and the Farm Bureau Inc. Board.
In his early years Jim was involved in the Rural Youth program, and it was there he met his future bride, Betty Jane Carothers. They were wed on August 24th 1952 in the Calvary Lutheran Church where they continue as members today. The couple had been looking forward to celebrating their 60th Anniversary this year. Together they enjoyed traveling to the Zephyrhills area of Florida with their fifth wheel camper.
Betty survives with their daughter, Janet S. (Curt) Howard and their two sons, grandsons Bryan J. Howard and Eric J. Howard along with one great grandson Kamryn J. Howard, all of Plymouth.
Jim is also survived by his two brothers, John (Eileen) Wade and Dwight (Elsie) Wade of Plymouth. A sister-in-law, Dorothy (Robert) Thomas of Danville, IN survives with many nieces and nephews.
He was preceded in death by his parents and a sister, Gloria Wade Miller.
The family will receive friends on Monday, February 6th from 4-8 p.m. in the Johnson-Danielson Funeral Home, 1100 N. Michigan St., Plymouth. Services will be held at 11 a.m. on Tuesday, February 7th in the Calvary Lutheran Church, 1314 N. Michigan St., Plymouth, where calling will continue after 10 a.m. The Rev. Steven Resner, pastor will officiate.
A graveside service will be held at 1:30 p.m. on Tuesday in the Woodlawn Cemetery, Walkerton.
Memorial gifts may be given to the church or the Center for Hospice Care, 112 S. Center St., Plymouth, IN 46563.