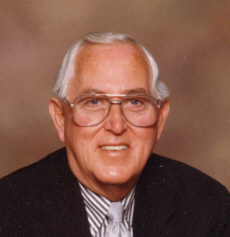 Former Mayor James Eugene “Jim” Yeazel died unexpectedly of a heart attack, at 9:30 p.m., Saturday, June 11, 2011, eight days before his 84th birthday, at his 917 West Washington Street home in Plymouth.
An enormously popular and respected man, his loss will be felt by many who laughed at his jokes and were cheered by his presence.
Jim was born in Plymouth on June 19, 1927, the son of Milo David and Cora Ellen (Green) Yeazel.
He lived his whole life in Plymouth except for the time spent in the Navy at Guantanamo Bay, Cuba, in World War II.
He graduated from Plymouth High School with the class of 1945. He was a member of Hi-Y and Yellow River Sea Scouts.
Music was important to Jim all of his life. At an early age Jim was an excellent musician, and by the age of six, he was playing the piano and entertaining the crowd at the Mayflower Tavern while his brother worked as a bartender. He then played with Dick Derf’s Band, singing, and playing bass and piano at various gigs for nearly 42 years. He was also with the Russ Steiner Quartet, The 3 Dimensions, The C Sharp Trio, and with Bob Richmond as The Two. Most recently he played with Doc Koontz. Jim was a man of great faith and shared his talent while singing with the choir at the First United Methodist Church where he was a member for the past 70 years.
Jim and Bonnie Lou Gardner first met at Franklin College in 1950 while Jim was visiting Plymouth friends. On their first date, he took Bonnie to the races at the New Paris Speedway. They were married at Bonnie’s home by Rev. Blake on March 23, 1951 and this year celebrated 60 memorable and loving years.
In 1991 he retired as a supervisor from the Bendix Corporation – Wheel and Brake Aerospace Division after 46 years of service. As a public servant in the 1960’s and for 16 years, Jim was a Justice of the Peace with an office in his home prior to the establishment of a municipal court system. In 2000, he was elected Democratic Mayor of Plymouth, serving until 2004. As mayor he engaged his constituents and fairly led all departments. On October 11, 2003 he was honored for his service by then Gov. Joe Kernan by being named a Sagamore of the Wabash, the highest honor a sitting governor can bestow on a citizen of Indiana.
Other civic involvments included being a member and past president of the Plymouth Arts Commission, many years as a board member for the Marshall County Blueberry Festival, former member of the American Legion Post 27 and current member of the V.F.W. Post 1162, Plymouth Optimist Club and Treasurer of the Marshall County Tourisim & Convention Bureau.
He also held fraternal membership in the Plymouth Kilwinning Lodge No. 149, having been past Worshipful Master, a member of the Ancient Accepted Scottish Rite – Valley of South Bend, and the Michigan City Orak Shrine. He also served as a Past Patron of Eastern Star.
Jim is survived by Bonnie, his devoted wife and by their children and grandchildren: a son, Jeffrey J. and Marsha Yeazel, Plymouth and their children; Sarah Yeazel, Jonathon Yeazel, Waylon (Amy) Budka and Asher Budka. A daughter, Lori E. and Jeffrey Mills, also of Plymouth and their children; Devin Taviner, Kenrick Mills, Cody (Aubrey) Mills and Deena (Donny) Osborn. Six great-grandchildren also survive along with two Boston Terriers who will also be missing their best buddy.
A brother, Dick Feltz, of Florida, survives as well as numerous nieces and nephews.
Jim was preceded in death by his parents, a son, David Ray Yeazel in 1988, three sisters: Bonnie Girten, Opal Doll, and Phyllis Jones, and three brothers: Roy, Russell and Robert Yeazel. Friends are invited to visit with Jim’s family on Wednesday, June 15, 2011, from 3 to 8 p.m. in the Johnson-Danielson Funeral Home, 1100 N. Michigan St. Plymouth. A Masonic Memorial Rite will be held at 7:30 p.m. in the funeral home.
Funeral services will be at 11 a.m. Thursday, June 16, 2011 in the First United Methodist Church, 400 N. Michigan St., Plymouth where calling will continue after 10 a.m. The Revs. Larry Marhanka, pastor, and Matt Pickut, associate pastor, will officiate.
Military honors provided by members of the American Legion Post 27, V.F.W., D.A.V. and South Bend Honor Guard will follow in the Oakhill Cemetery.
Family and friends will then return to the church Fellowship Hall for a celebration of Jim’s life.
Preferred memorial gifts are requested to the First United Methodist Church.