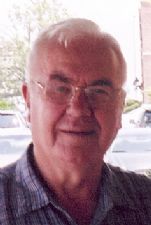 James S. Landis, 83, of Quarryville, died Tuesday afternoon, July 20, 2010, at his residence. He was the husband of Nadine Zahm. His first wife Evelyn M. Ressler Landis died March 18, 1998. James was born in Harrisburg, a son of the late Morris B. and Ella Snyder Landis.
James attended Wesley United Methodist Church.
James was retired from his crop spraying business. He enjoyed traveling, and riding his motorcycle. He had belonged to several motorcycle groups.
In addition to his wife, he is survived by 2 sons, James, Jr. married to Lynn Landis, Robert L., married to Alta Landis, both of New Providence, daughter, Donna, married to John Hershey, New Providence, son-in-law, J. Francis Metzler, Holtwood, 6 grandchildren, 12 great grandchildren, 2 brothers’ Charles Landis, and John, married to Sharon Landis both of Quarryville. He was also predeceased by a daughter, Debra Metzler, and brother, Morris B. Landis, Jr.
Funeral services will be held on Saturday, July 24th at 11:00AM from Wesley United Methodist Church, 7 Wesley Road, Quarryville, PA with Pastor R. Blake Deibler officiating. Interment will follow in Quarryville Cemetery. The family will receive friends at the church from 9:30 AM until the time of service. Please omit flowers with contributions in James memory to Hospice of Lancaster Co., PO Box 4125, Lancaster, PA 17604.