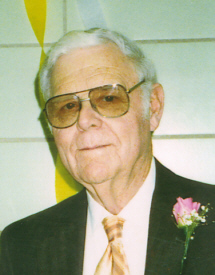 James M. “Jim” Cook, 89, formerly of Plymouth, died, following an illness, at 10:15 a.m., on Wednesday, January 18, 2006, in the Jennings Health Care Center, North Vernon, Indiana, where he had been living since June of 2004.
A soft-spoken man, he will be remembered for his friendly greetings to everyone he met.
Jim was born in Fort Wayne, Indiana, on March 7, 1916. He was the son of James B. and Mary L. Lindsey Cook. He graduated from Lincoln High School with the class of 1936.
He served his country during World War II as a member of the United States Army, from 1941 through 1945. He was honorably discharged as a Sergeant having served in the Philippine Islands. On November 14, 1941, in Plymouth, Jim and his sweetheart Donna Belle Rhodes were married. Donna Belle died on November 7, 2003.
Jim worked as the Director of Personnel for the McCord Corp. for 40 ½ years, retiring in 1981.
He was active in baseball and softball and was instrumental in forming four area teams: Twin Lakes Dairy, American Legion, Ford Motors and Coca Cola. He himself as a pitcher, was a member of the first Plymouth Legion team in 1932 and was the oldest surviving team member.
He loved to fish, was crazy about the Chicago Cubs, the music of Lawrence Welk and the sounds of the ‘Big Band’ era.
He was a member of the V.F.W. Marshall County Post 1162 and the Plymouth American Legion, Post 27 with whom he assisted honoring fallen comrades at numerous graveside honors.
Jim is survived by two sons and a daughter. They are: James R. Cook and Gail L. “Patty” Cook, both of North Vernon, Indiana, and Carol Jean and “Doug” Barnlund, La Marque, Texas.
Four granddaughters and nine great-grandchildren survive as well. Two brothers, William and Vida Cook, New Haven, Indiana, and Robert Cook, Northfield, Illinois, also survive, together with several nieces and nephews.
Jim was preceded in death by his parents, his wife, an infant sister and Art Cook, a brother.
Friends will be welcomed by his family to celebrate the life of Jim Cook, from 4 to 8 p.m. on Friday, January 20, 2006, in the Johnson-Danielson Funeral Home, 1100 N. Michigan St., Plymouth.
Funeral services for Jim will be at 1:00 p.m. on Saturday, January 21, 2006, in the funeral home. The Rev. William Kaster, pastor of Trinity United Methodist Church, will officiate.
Military graveside honors will be accorded to Jim in New Oakhill Cemetery, Plymouth, by members of the VFW Post 1162 and American Legion Post 27.
Memory gifts in Jim’s memory may be given to the Marshall County Humane Society.