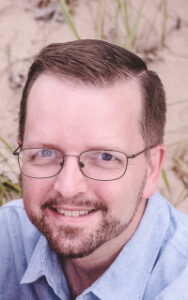 James Matthew Faulstich, 48, of Plymouth, IN passed away on Wednesday, November 13, 2019. James was born to Mark C. and Joyce L. Faulstich on May 19, 1971, the first of four boys, followed by Jason, Mark, and Jeff.
He grew up in Plymouth, graduating from Plymouth High School in 1989. He received a bachelorâ€™s degree from Marian College in Math and Chemistry and then went on to earn a masterâ€™s degree from Indiana University in South Bend in Business Administration. On October 7, 2000, James married Michele Suzanne Anderson at the United Methodist Church in Osceola, IN. In the following years, their union brought them two boys, Drew and Jacob, the pride and joys of their lives. A hard worker, James had a sharp analytical mind which helped promote him to Vice President of Administration and Technologies at US Granules Corporation where he worked for over 25 years. His astute business mind helped him contribute to successful projects in the Plymouth community while he was a member of PIDCO, Plymouth Industrial Development Corporation.
James was a kind-hearted man who was always giving of his time to help others. He was a technology guru, master fixer of all things, and an expert problem solver. He had a very deep love of family which could be seen through the hundreds of pictures he would take of his sons on the soccer field, special family vacation trips, and family gatherings. He enjoyed being outdoors and taking long bike rides in the country.
James was a faith-filled man who continually pursued ways to know and love God better. He was a member of Plymouth First United Methodist Church and enjoyed helping with their technology needs by being a soundboard technician and posting services, pictures, and videos to social media. He was newly attending New Song Church with his family on Sunday mornings. Those that survive him are his wife Michele; sons Andrew Joseph and Jacob Elliot, all of Plymouth; his parents Mark and Joyce Faulstich of Plymouth; brothers Jason (Angela) Faulstich of Plymouth; Mark (Kara) Faulstich of Colorado Springs, CO; Jeffrey (Valerie Lake) Faulstich of LaOtto, IN; Grandmother Stephina Watkins of Winamac, IN; mother-in-law Dian Anderson of Berea, KY; brothers-in-law Anthony Anderson of Lexington, KY and Collin (Lauren Meltzer) Anderson of Ferndale, MI; sister-in-law Jill (Jonathan Wires) Anderson of Antioch, TN; many aunts, uncles, cousins and friends also survive. Preceding him in death are his grandparents, Lawrence and Rita Faulstich and William Watkins; and his father-in-law Jim Anderson. Friends are welcome to celebrate Jamesâ€™ life on Saturday, November 23, 2019. Visitation hours will be held from 11 a.m. until 2 p.m. with services following at 2 p.m. with the Rev. Toni Carmer officiating, all at New Song Church, 1292 Baker St, Plymouth, IN 46563.
After a long struggle with anxiety and depression, James lost his battle and went to his eternal home to be at peace. In lieu of flowers the family requests donations in Jamesâ€™ name to Epworth Hospital 420 N Niles Ave, South Bend, Ind. 46617 or Caring Coalition MC 16779 W. Lincoln Hwy. Plymouth, Ind. 46563