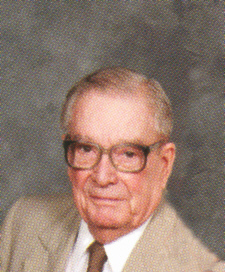 James Lawrence McCarthy, Jr., 91, died of natural causes on Friday, July 27, 2007, in the Catherine Kasper Life Center in Donaldson, Ind.
James was born on September 8, 1915, in Crawfordsville, Ind. He was the son of James L. McCarthy, Sr., and Anna Carver McCarthy.
A veteran of World War II, James served as a major in the United States Air Force and received the Bronze Star and the Asiatic-Pacific Service medals.
He attended Wabash College in Crawfordsville and was a Public Accountant with his own business, J.L. McCarthy, Inc. for over 50 years.
James is survived by his wife, Mary Lou. They were married on March 19, 1993. Six sons and one daughter were born by a previous marriage. They are James L. McCarthy III, of Chicago, Ill.: Martin (Monica) McCarthy, Chicago, Ill.: Brian McCarthy, Chicago, Ill.: William (Maureen) McCarthy, Salem, Va.; Richard McCarthy and Charles McCarthy, both of Crawfordsville, Ind., and Ruth (Fernando) de Torres of Worchester, Mass.
Ten grandchildren survive as well, together with two brothers and one sister: Thomas (Bee) McCarthy of Indianapolis, Ind..: Fred (Shirley) McCarthy, Chino Hills, Calif., and Josephine (Hank) Mangus of Palm Desert, Calif.
James was a member of St. Michael’s Catholic Church in Plymouth.
Friends are invited to celebrate James’ life with his family on Sunday, July 29, 2007, from 6 to 7 p.m. in the Catherine Kasper Home Chapel with a Wake Service at 7 p.m. Funeral services will be held on Monday, July 30, 2007, at 2 p.m. in the Catherine Kasper Home Chapel, Donaldson.
Burial will be in Calvary Cemetery in Crawfordsville, Ind., on Tuesday, July 31, 2007, at 11 a.m. Memorial gifts in James’ memory may be made to the Poor Handmaids of Jesus Christ