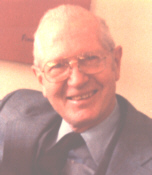 James Michael Morrissey moved to Plymouth with his wife, Rosella and the first two of their children, shortly after World War II where he had just purchased Harold Roush’s tractor and implement business.
All of his life, he was a tractor and bulldozer man.
Born in Shenandoah, Iowa, on March 20, 1911, to James B. and Catherine Nestlebush Morrissey, he attended schools in Iowa, completed high school in Omaha, Nebraska and then attended Creighton University.
In 1933, after both Jim and his brother Paul had finished school, they established a John Deere and Caterpillar sales and service business known as the Morrissey Farm & Orchard Supply, in the fruit belt of that state, just north of Grand Rapids, Mich.
By 1939, until he became involved in the war effort, Jim was working out of Peoria, Ill., as a field engineer in the western states for Caterpillar Tractor Co.
During the war, Jim was put in charge of the Ordnance Plant in Decatur, Ill., where they built thousands of indispensable Caterpillar tractors with bulldozers used by American Army soldiers and U.S. Marines.
Jim and Rosella Colgan, married in Peoria, Ill., on the 2nd of July 1942, moved to Indiana after the war and for the next 30 years, Jim operated the Plymouth Farm Supply, a John Deere sales and service business.
He sold out his business to follow his dream of writing books.
During his retirement years, he wrote four historical and humorous non-fiction books. One, about the perils of tractors and converting horse farmers into tractor-operators which had to be reprinted three times due to its popularity attributed in part to radio shows and magazines. He never failed to respond to comments from readers around the globe.
Always very articulate, he also penned numerous articles for the church archives and other publications.
In later years, Jim was a strong advocate for maintaining river beds to reduce flooding in Plymouth. Based on his personal experience — having suffered losses at his dealership during the great flood of 1954 — Jim campaigned to safeguard farmland from similar losses for regional farmers.
He served his church with devotion and dedication.
He was a member of Saint Michael’s Roman Catholic Church for nearly 60 years. He was an usher and served on the Board of Trustees during the years when the new Saint Michael’s school was built and was instrumental in securing the needed property for the building in 1953. Years later, he eagerly endorsed the expansion project of the school that his dear wife, Rosella, derived such pride from as a teacher and first lay administrator.
He was a contributing member of the Knights of Columbus, Council 1975.
He and his wife spent several weeks during the winter in the Ft. Myers, Fla., area and summers at the family cottage on Koontz Lake.
Jim Morrissey died on Monday, February 28, 2005, at 2:05 p.m. in the Saint Joseph Medical Center, Plymouth. He would have soon been 94 years-old.
His life was a shining example of decency and commitment. He touched and inspired thousands with his writing –his wit, laughter and ceaseless charity inspired others through his long and fruitful life.
Jim is survived by his four daughters, their spouses and children. They are: M. Kathleen Scholl and Anne C. Morrissey, both of Milwaukee, Wis.; Patricia J. and Herbert Hillenmeyer, Carmel, Ind.; and Susan C. and C. Randall Finger, Colorado Springs, Colo.
His grandchildren are: Heather A. Scholl, Maureen E. Hillenmeyer, Elaine M. Hillenmeyer, Elizabeth C. Finger and Ryan Morrissey Finger.
A sister, Yvonne Hall, LaVerne, Calif., also survives.
Jim was preceded in death by his parents and his beloved wife, Rosella, who died on December 24, 1995. Three brothers and four sisters have also died. They are John, Paul V. and Albert J. Morrissey and Charlotte LeClerc, Kay Morrissey, Irene Riordan and Lucille Schaben.
Friends will be welcomed to celebrate the life of Jim Morrissey on Thursday, March 3, 2005, from 4 to 8 p.m. in the Johnson-Danielson Funeral Home, 1100 N. Michigan St., Plymouth, Ind. and continuing after 7 a.m. Friday.
A rosary will be prayed at 4:30 p.m. Thursday in the funeral home.
The Mass of Christian Burial, celebrated by the Rev. William J. Kummer, pastor of Saint Michael’s Roman Catholic Church, will be held at 11 a.m. Friday in the church, 625 N. Center St., Plymouth.
Burial will be in New Oakhill Cemetery, Plymouth, Ind.
Memorial gifts in memory of Jim may be given to the Juvenile Diabetes Research Foundation International, Ind. Chapter, 8465 Keystone Crossing, Suite 235, Indianapolis, Indiana 46240 or St. Michael’s School.