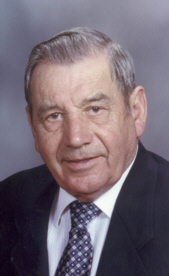 James O. Thornburg, 84, a resident of the Maria Center at Ancilla Domini, passed away at 8:53 a.m. Saturday, May 14, 2011, at St. Joseph Regional Medical Center – Plymouth Campus after enduring a chronic illness for many years.
A lifetime area resident, Jim was born the son of Homer O. and Ethel E. (Helterbrand) Thornburg on March 17, 1927, in Walkerton, Ind. He graduated from Grovertown High School in 1946. Jim served in the U.S. Army as an occupational troop in Japan following the end of World War II. He returned home and was introduced to Irene Catherine Sobinski, and on June 26, 1949, in Plymouth, they were joined in marriage that spanned 55 wonderful years together before Irene’s passing Sept. 22, 2004. In 1986, after 38 years of service, he retired from Bendix Corporation in South Bend. He was a member of Plymouth Church of the Brethren since 1966, had served on the board of the Marshall County Mental Health Association and was involved with the Second Wind Support Group of South Bend.
Jim was first and foremost a family man as the father of four. He loved being involved with their many activities including scouting and coaching Little League. He enjoyed part-time farming, gardening, wood carving and watching birds. As his family continued to grow, he was able to witness and participate in many of his grandchildren’s activities and shared with them his joy of mushroom hunting and fishing.
Jim experienced the loss of two children: son John E. on Jan. 1, 1979, and daughter Nancy J. Martin on Feb. 25, 2006. Two brothers, Calvin and Eugene Thornburg, and one sister, Evelyn Eyrich, also preceded him in death.
Jim’s surviving family members include his son, Mark (Julie) Thornburg of Zionsville; daughter Carol (Mark) Jeffirs of Argos; grandchildren Stephanie (Matthew Purdeu) Martin of Terre Haute, Julia (Jeremiah) Hosch of Hobart, Amelia (Todd) Hooper of Goshen, Nathaniel Jeffirs of Wooster, Ohio, Benjamin, Timothy, Abigail and Alexandra Jeffirs, all of Argos, and Maxwell Thornburg of Zionsville; great-grandchildren Danyelle, Sara, Hannah, Caleb, Brittany (Andy), Linda, Jason, Taylor and Leigh; and great-great-granddaughters Bryley and Hannah Lynn. His sister, Ruth (Dennis) Zent of Nappanee; sister-in-law Phyllis Thornburg of Plymouth; and Nancy’s companion, Nicholas Hudak of Valparaiso survive, as well. Visitation will be from 5 to 8 p.m. Wednesday, May 18, at Johnson-Danielson Funeral Home, 1100 N. Michigan St., Plymouth. The service will be at 11 a.m. Thursday, May 19, at Church of the Brethren, 1130 N. Michigan St., Plymouth, with one hour of visitation prior, beginning at 10 a.m. Pastor Ruth Yoder will officiate with the presentation of the flag by Commander Julian Keiser of the Plymouth American Legion Post 27.
Memorial gifts may be given in Jim’s name to the church; the Center for Hospice Care, 112 S. Center St., Plymouth, IN 46563; or the Cancer Association of Marshall County, 9739 Sunnyside Drive, Plymouth, IN 46563.