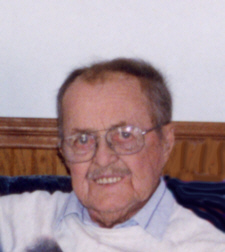 James Richard “Dick” Morgan, 82, a longtime Argos resident, passed away due to natural causes on Saturday evening, January 31, 2009 in the St. Joseph Hospital at Ft. Wayne, Indiana.
Dick was born March 27, 1926 in Plymouth, the son of Oscar Eugene and Hazel Agnes (Unger) Morgan. He attended the Linkville School.
In 1955 he was eager to serve his country and enlisted in the U.S. AirForce.
Dick was a carpenter by trade and personally raised hogs until an early disability prevented him from doing so.
He first married Janet E. Hamman who survives. Together they had five children: Hope C. (Virgil) Herring of Grovertown, Kelly L. (Paul) Antoine of Bryan, Ohio, Gretchen D. (John) Worley of LaPorte, Bridgett B. Koz of Argos and Mark R. (April) Morgan of Donaldson.
On September 19, 1987 in Argos, he married Marvis A. (Jones) Crum whose children include: Dawn M. (Dan) Byler of LaGrange, Ind., David A. (Julie) Crum of Plymouth and Duane L. (Laura) Crum of Holmdel, NJ. All together there are 27 grandchildren and 10 great-grandchildren.
Dicks surviving siblings are: Daren (Dorothy) Morgan of Plymouth, Stanley (Dorothy) Morgan of Rochester, Jane Wilson of Greenwood, Ind., Mary Ann Orr of Warsaw, Helen Robinson and Barbara (Jake) Elliott both of Tippecanoe, Kay (Bill) Smith and Lois Evans all of Plymouth. Numerous nieces and nephews also survive.
Dick was an active member of the Jordan Baptist Church, he enjoyed square dancing as a member of the Rochester “Swinging Dudes”, was a Master Gardener, he wrote and had published works of poetry, he also enjoyed reading, fishing, listening to Country/Western music and above all time with family.
In July of 2008, Dick was saddened at the passing of his wife Marvis. Also preceding in death were his parents, three brothers; Lloyd, Wayne Kent, and John Adrian Morgan and a sister; Norma Fillinger.
All are invited to share memories with the family on Wednesday, February 4th from 4 – 8 p.m. in the Johnson-Danielson Funeral Home, 1100 N. Michigan St., Plymouth where calling will continue after 7 a.m. Thursday in the absence of family. Funeral services will be held at 11 a.m. Thursday in the Jordan Baptist Church, 11447 19th Road Argos with Pastor Thomas Tupps officiating. Calling will occur there one hour prior to services.
Burial will follow in the Jordan Cemetery where military honors will be accorded to him.
Memorial gifts may be made to the Church or the American Cancer Society, 601 W. Edison Road, Mishawaka, IN 46545