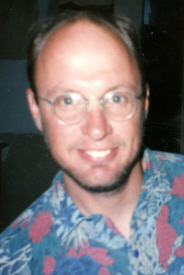 James R. Eads, 55, passed away on Sunday, January 25, 2015 at 3:00 p.m. at Memorial Hospital of South Bend.
Born in South Bend, Indiana on August 7, 1959, Jimmy was the son of Nolan M. and Frances I. (Colwell) Eads. He graduated from Plymouth High School in 1977 and soon after joined the U.S. Navy. He served on the U.S.S. Lang, and while serving in the South Pacific assisted Indonesian refugees. He was Honorably Discharged in October of 1982.
On April 4, 1992, Jimmy married Beth A. Washburn in the Church of Christ in Bourbon. To this union two children were born, Calvin James and Michael Francis.
Jimmy worked as a licensed waste water operator, serving many of the local cities. He was also a laborer for various companies in the area. He was a member of the Laborers and HOD Carriers Union Local 166 and the NIOWA. Also, Beth and he were members of the First Presbyterian Church in Plymouth, joining a great poker player and friend, Hal Gronniger and his wife Patti.
He was an avid golfer and enjoyed fishing when he had the chance. He was a fan of NASCAR driver Dick Trickle, which he met at the Winchester Speedway. Jimmy was involved in his son’s high school football and a fan of the Rockies. He was a Civil War history buff and a fan of the Baltimore Orioles. He was extremely kind and gentle, and an amazing dad. He helped build a Godzilla suit for his son Michael, and the family went to the Godzilla Fest in Chicago two years in a row. Jimmy was a family man, always making his kid’s interests his own and supported them whole-heartedly.
Jimmy is survived by his wife Beth of Plymouth and their two sons: Calvin of West Lafayette and Michael of Plymouth. His siblings are: Jerry Eads of Kendallville, Norma (George) Rosh of Indianapolis, Roger (Cindi) Eads of South Bend and Tim (Angi) Eads of Plymouth. His nieces and nephews whom survive are: Barbie, Zach, Matt, Tyler, PJ, Brianne, Dustin, Brandy, Alex, Hannah, Elliot, Adam, Josh, Chrystal, Dan and Ryan, as well as, his mother-in-law, Eileen Washburn of Peru, IN.
He was preceded in death by his parents, siblings, Barbie Ann and Philip Eads, nephew Aaron Black, and father-in-law, Jack Washburn.
Visitation will be from 4 – 7 p.m. on Wednesday, January 28, 2015 in the Johnson-Danielson Funeral Home, 1100 N. Michigan Street, Plymouth. Funeral services will immediately follow in the funeral home at 7 p.m.
Memorial contributions can be made to the United Way of Marshall County, 2701 N. Michigan Street, Plymouth, IN 46563 or to the Autism Resources of Marshall County, P.O. Box 418, Plymouth, IN 46563.