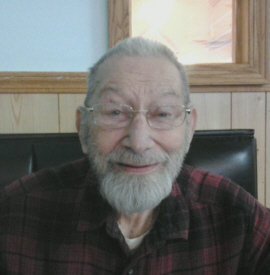 James â€œJimâ€ R. Snyder, 93, went home to be with his Lord and Savior, Thursday, August 11, 2016.
He was born November 17, 1922 in North Liberty, Indiana, to the late Max and Daisy (Workman) Snyder.
Jim graduated from Lakeville High School, and then attended Stanford College for a year and a half. After college, Jim joined the Army and served during WWII; he was discharged February of 1946.
He was preceded in death by his first wife of 23 years, Rose L. (Gibson).
He married Edna M. (Peters) on July 8, 1972; she preceded him in death on December 2, 2007. After Jim was discharged from the Army, he began working at Studebakers. He then sold life insurance before becoming a sales representative for Cogan Oâ€™Brien in Chicago. He later retired after selling real estate for Plymouthâ€™s Jellystone Park at the age of 81. He was a lifelong member of the VFW Post 360 in Mishawaka as well as a member of the Southlawn Church in South Bend and Albright United Methodist Church in Mishawaka. He umpired and refereed baseball, basketball and football. Jim was an avid Cubâ€™s and Notre Dame fan as well as a big fan of the Castaways Family Diner in Plymouth. Surviving is a daughter and son-in-law: Rosi and Tom Heroy of Richmond, son and a daughter-in-law: Jay and Loni Snyder of South Bend, son-in-law: Pat and Debbie Bybee of Jones, MI, daughter-in-law: Cathy Snyder and Jack LaFollette of Warsaw, five grandchildren and spouses: Brandy and Tom Szynalski, Adam Bybee, Jayson and Jenny Snyder, Krishna and Jason Roler, Ben and Lauren Snyder, twelve great-grandchildren, one great-great-granddaughter, and a sister; Donna Hall of Nevada. Also surviving are several nieces and nephews. He was also preceded in death by his parents, his brother Lowell Snyder, and his sister Bonnie Snyder. The family will receive friends from 4-7 PM on Wednesday, August 17, 2016 in the Johnson-Danielson Funeral Home, 1100 North Michigan Street, Plymouth.
Funeral services will be held at 11:30 AM Thursday, August 18, 2016 in the funeral home with Rev. Larry Baker officiating. Visitation will resume at 10:30 AM until time of service. Burial will be in the Sumption Prairie Cemetery, South Bend.