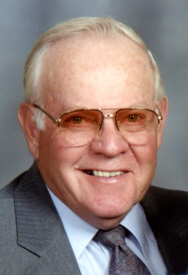 James Roy Reed, 89, a lifetime Marshall County resident passed away at Pilgrim Manor in the care of his loving family and the wonderful staff at Pilgrim at 4:45 p.m. on March 11, 2015 after a 25 year struggle with diabetes. He was born James Roy Reed to Elson and Faye (Seymore) Reed on March 27, 1925 at 933 South Michigan Street in Plymouth, Indiana. He graduated from Tippecanoe High School with the class of 1943 and attended banking classes at IUSB.
On June 5, 1949 Roy married Esther L. Bolinger in the Walnut Church of the Brethren. To this marriage was born seven children: Gloria, Philip, Michael, Donald, Marlin, Mark and Robert. He first worked in a ticket office of the Indiana Motor Bus Company. After they moved their office to South Bend, he went to work for Farmers State Bank in LaPaz, Indiana. After 25 years he retired and bought the Dairy Queen, which he ran for five years before his retirement. Roy didn’t like retirement so he went to working part-time for First Source Bank for four years and a Homestead Shoppe for 13 years. He officially retired at the age of 80.
Roy loved music. He sang with the Men’s Chorus at Pine Creek Church and the Marshall County Community Choir. He was lead singer in three different male quartets: The Messengers from Goshen, The Pine Creek Four from North Liberty, and the Marshall County Men of Music in Plymouth. Roy also sang at many wedding and funerals.
He loved flowers, and his yard was always beautiful with flowers. He took great pride in his yard and flowers gardens. He was active in his church and volunteered his services as an altar server. He served on the 73rd Marshall Centennial Committee. He took first place in the combined beard and mustache contest. Roy was also known for his delicious homemade pies. After retirement, he took up crocheting, making over 150 afghans, giving mostly away as gifts.
He is survived by his children: Gloria (Kevin) Nelson of Indianapolis, Michael L. (Stacie) Reed of Plymouth, Donald R. (Vicki) Reed of Argos, Marlin K. (Tari) Reed of Plymouth, Mark A. (Tina) Reed of South Bend and Robert E. (Cindy) Reed of Indianapolis; 8 grandchildren and 9 great-grandchildren.
He was preceded by his wife in October 17, 2007 and his parents. Also his step-mother, Erbie Reed, his son Philip; 5 sisters: Betty Hall, Virginia Harmon, Mary Gensinger, Joan Hudson and Lucille Jones; three nephews, David and Kenneth Harmon and Dr. DeVon Gensinger.
Visitation will be from 3-6 p.m. on Sunday, March 15, 2015 in the Johnson-Danielson Funeral Home 1100 N. Michigan Street, Plymouth.
Funeral services will be at 11 a.m. on Monday, March 16, 2015 in the Walnut Church of the Brethren, 19056 Gumwood Rd, Argos. Visitation will resume one hour prior to the service in the church.
Burial to follow in the Walnut Cemetery.
Memorial contributions can be made to the Philip E. Reed Scholarship Fund c/o the LaPaz Lions Club or the American Cancer Society P.O. Box 655, Plymouth, IN 46563.