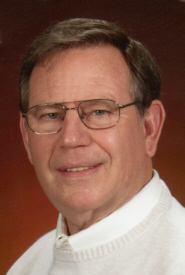 James “Jim” Vander Velde, 77, passed away with his family by his side at 3:00 p.m. on Friday, March 4, 2016 at Signature Healthcare of Bremen.
Jim was born on July 3, 1938 in Chicago, Illinois to Maurice and Elizabeth (Ottenhoff) Vander Velde. He graduated from Timothy Christian High School with the class of 1956. He then furthered his education by attaining his bachelor’s degree from Calvin College in Grand Rapids, Michigan.
On December 19, 1958, Jim married the former Janice L. Boerema. To this union came four children: David James, Debra, Denise and Diane.
Jim worked as Senior Vice President for Tri-City Savings & Loan in Oak Park, IL before its merge with St. Paul Federal Savings, when he became the Regional Vice President. He was a board member for Trinity Christian College and Elim Christian School, as well as, founding board member of Bethshan. He was a partner of Lincoln Mortgage in Elgin, IL, a Service Master commercial franchisee, and built many homes under Windmill Enterprises. Jim was an Elder and Deacon in various churches he attended. Most recently he was a member of Crossroads Church in Plymouth, IN. He was a Lion Club member in Illinois.
Aside from his many work accomplishments, Jim also enjoyed photography and achieved his pilot’s license. His greatest joy was his family and the memories made with them. Janice and Jim were foster parents to over 50 children.
Jim is survived by his wife of 57 years, Janice of Plymouth and their children: David (Mary) Vander Velde of Oregon, WI, Debra Tuma of Batavia IL, Denise (Michael) Cassidy of Naperville, IL and Diane (Daniel) Barak of Oak Brook, IL. His nine grandchildren are: Matthew (Ashley) Tuma, Kristin (Christopher) Erfuth, Kimberlee (Daniel) Beckstrom, David Ryan (Jenna) Vander Velde, Jennifer (Mark) Laabs, Michelle (Jason) Moss, Justin Barak, Kyle Cassidy and Ashley Barak. Nine great-grandchildren and two sisters, Ruth Frisbie and Lois Jordan, also survive.
He was preceded in death by his parents, brother, George, son-in-law, Glen Tuma Jr., and great-grandson, Ryan Laabs.
The family will receive friends from 10-11a.m. EST on Thursday March 10, 2016 in the Crossroad Church 1650 N. Oak Drive, Plymouth, IN. Funeral Services will begin at 11 a.m. EST in the church with Pastor Scott Yoder officiating.
Burial will follow in the New Oak Hill Cemetery.
Memorial contributions can be made to the Crossroads Church, 1650 N. Oak Drive, Plymouth, IN 46563.