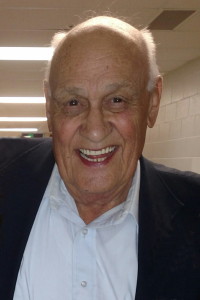 James W. “Jim” Daugherty, 87, passed away on Sunday, November 24, 2019 at Autumn Trace Senior Community and Assisted Living Center in Plymouth.
Born in Starke County, Indiana in his familyâ€™s farmhouse on March 13, 1932, Jim was one of 13 children born to Russell and Dorothy (Reinholt) Daugherty. At the age of 13, his family moved to Plymouth. He and his brother, Don, took turns driving the horses and wagon with familyâ€™s belongings. He attended Lincoln High School, playing all sports but excelling in basketball with the coaching from Art Thomas. When he was 16 his father got sick. Don and Jim stepped up to help farm and had to drop out of school. Discovering he was not very fond of farming, Jim decided to join the U.S. Air Force on December 27, 1951.
Stationed at the Youngstown Air Base in Ohio, Jim met Norma Jean Reiter. They got engaged before Jim was sent overseas for 3 years in England. While serving, he played on the Air Force basketball team and with that, flew to over 17 different countries to play. He worked security for Queen Elizabeth’s Coronation with the Air Force Military Police, and was also invited to her ball that evening. He learned quickly that if he looked sharp in his uniform, he would be sent out for town patrol, which he enjoyed. Proud of his time served and the opportunities he received, Jim was Honorably Discharged in 1955.
On February 5, 1956, in Jim’s parents’ home in Plymouth, he married Norma. They soon became known as “Big Jim” and “Little Norm”. To this union came their children: James II, J.C. and Mary-Ann. He coached kids little league. He helped bring Jr. League Football to Plymouth, with the help from Eugene Chipman, Bob Harris, Dave Feagler and Dr. Harry Stoller.
Jim was a past president for the Plymouth Booster Club, with Normaâ€™s help, making many Friday night chili dinners for the baseball team fundraisers. He was a season ticket holder for PHS Boys Basketball for 60 years. He was a member of the Blueberry Festival Board and volunteer for over 30 years; serving as past president. He was past Worshipful Master of the Plymouth-Kilwinning Masonic Lodge #149 in Plymouth and a 48-year member. Jim was also appointed by Mayor Jack Greenlee to the Plymouth Police Department Advisory Board for 12 years. He worked for Del Monte since 1983 until his retirement.
Jim and Norma used to camp a lot with their “camping crew”, visiting Branson, yearly Covered Bridge Festivals and local campgrounds. He was an avid Chicago Cubs and an IU Basketball Fan.
He was very active in his family’s lives. From his own children’s cross country meets, basketballs games, choir concerts and musicals, to watching his grandchildren in similar activities. Jim formed a special bond with his grandkids, wanting to know everything they were involved in. He was a man given a “happy gene” that everyone that met him grew to love and never forget. He was polite with his thank yous after someoneâ€™s help and always had a firm handshake. He was just a good guy.
Jim is survived by his children: James W. (Susan) Daugherty II, and their children Wil and Hannah (Evan) Pohl: J.C. (Melinda) Daugherty and their children Jarin, Marissa (Nic Kelly) and Mandi: and Mary-Ann (Rodney) Back, and their child, Bailey, all of Plymouth; his little four-legged girl, Katie; and his siblings: Kathryn (Orville) Holcomb, Luther (Joan) Daugherty, Carolyn (Eurrat) Saylor, Robert (Millie) Daugherty, Richard (Phyllis) Daugherty, Tommy (Sandy) Daugherty, Vickey Joe Daugherty, Jane (Dan) Miller, Barb Gouker and sister-in-law, Darlene Daugherty.
He was preceded by his wife Norma in 2013; siblings, Donald, Marilyn and Jerry; and brother-in-law, Mike Gouker.
Visitation will be from 4 to 7 p.m. on Friday, November 29, 2019, in the Johnson-Danielson Funeral Home, 1100 North Michigan St., Plymouth. A Masonic Rite will be performed at 7:00 p.m.
Funeral services will be held in the funeral home on Saturday, November 30, 2019 at 11 a.m. with Life Celebrant James Smart officiating. Visitation will resume one-hour prior.
Burial will follow in the New Oakhill Cemetery, Plymouth with Military Honors provided by members of the American Legion Post 27, Veterans of Foreign War- Marshall County Post 1162 and Disabled American Veteran Chapter 42.
Memorial contributions may be made to the Disabled American Veterans, 300 Green Bay Road Room 154, Chicago, IL 60064.