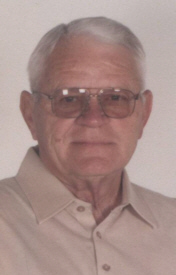 James W. Rupard, 82, passed away at 10:30 PM Sunday, July 26, 2015 at Catherine Kasper Home, Donaldson. James was born November 16, 1932 in Brooklyn, Arkansas to James H. and Pauline (Sharp) Rupard. On August 24, 1951 in Mishawaka, he married Rose M. McClure. James owned and operated Jim’s Radiator, retiring in 1994. He was a member of the North Salem Church of God and the Moose Lodge #741. James is survived by his wife of 63 years, Rose M. Rupard, Plymouth, two sons and daughters-in-law, Thomas (Christine) Rupard, Cherokee Village, Arkansas, Gary (Debbie Fray) Rupard, Valparaiso, daughter and a son-in-law, Roxanne (Thomas) Marciniak, Mishawaka, 6 grandchildren, and 7 great-grandchildren. He was preceded in death by his parents, and a grandson, Michael Marciniak. Visitation will be from 11-1 PM Wednesday, July 29, 2015 in the Johnson-Danielson Funeral Home, 1100 North Michigan Street, Plymouth. Funeral services will be held at 1:00 PM on Wednesday, July 29, 2015 at the funeral home, with Pastor Bob Collier officiating.
Burial will be in the Chapel Hill Memorial Gardens Cemetery.
Memorial contributions can be made to the Center for Hospice Care, 112 South Center Street, Plymouth, Indiana 46563.