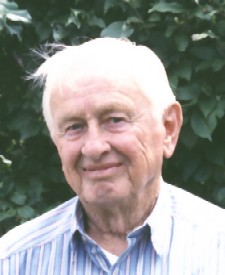 James A. Whiteman, 94, died Thursday February 28, 2008 in St. Joseph Regional Medical Center, Plymouth at 3:07 PM.
James was born October 24, 1913 to Claude C. and Katherine Harrison Whiteman in Chicago, Illinois.
He graduated from Horace Mann High School in Gary, Indiana and then attended Purdue University.
December 31, 1935 in Valparaiso, Indiana, James took Ruby B. Howland to be his wife; together in 1946 they founded Whiteman’s Greenhouse in Plymouth.
James worked as a fireman in Gary and at the Kingbury Ordinance Plant, but went on to retire from Bendix, up until his passing he was the oldest living retiree from Bendix.
He was deeply interested in rock hounding, faceting, and lapidary. Being an avid reader James was always seeking knowledge. He was family oriented and enjoyed traveling out West; he even wintered in Standfield, Arizona. His grandchildren recall fond memories of playing baseball with grandpa in the yard.
James is survived by two sons Jim & Nancy Whiteman and Tom & Maxine Whiteman all of Plymouth, IN; a daughter Deborah & Roger Emmons, Sr. of Lapaz, IN; 14 grandchildren, 32 great grandchildren, and 6 great great grandchildren survive as well.
He was preceded in death by his wife, his parents, two sons Robert and Richard, a brother Claude H., and a sister Florence.
Friends are invited to visit and share with the family Sunday March 2, 2008 from 4 – 7 p.m. in the Johnson-Danielson Funeral Home, 1100 N. Michigan Street, Plymouth, IN 46563. Calling will continue Monday morning at 7:00 a.m.
Funeral services officiated by Rev. Thomas Whiteman and Rev. Steve Cox will be held Monday March 3, 2008 in the funeral home at 10 a.m.
Burial will be in New Oakhill Cemetery, Plymouth.
In lieu of flowers memorial contribution may be given to the Union North Ambulance.