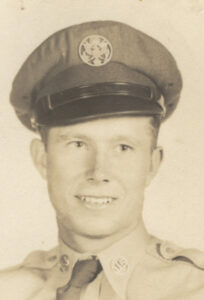 Jamie Lee Mohon, 80, passed away unexpectedly Thursday afternoon at St. Joseph Regional Medical Center Plymouth Campus.
Jamie better known as “Jim” was born in Golden Pond, Kentucky son of Troy and Mae (Dunn) Mohon.
On March 25, 1977 Jim married his love Mary Ann in Chesterton, Indiana together they have a daughter Linda Mohon of Plymouth. Jim had three sons from a previous marriage Edward, Clifford and Jeffery. Jim has three stepchildren Barb Lindstrom, Joanie Vanata and Danny Moore. He also has a brother Troy Mohon of Granite City Ill. and four sisters Jean Knevich, Dorothy Winters, Betty Herms and Sue Harrison. Jim also has eleven grandchildren.
He was preceded in death by his parents.
Jim was a U.S. Air Force Sergeant serving as a military police officer until his discharge in 1955. He had been a member of the Chesterton American Legion Post.
For many years Jim maintained a farm in Grovertown. Most recently he had worked as a boilermaker foreman with Union Local No. 374 until his retirement. Some of Jim’s favorite past times were having coffee at Mundy’s, Cindy’s and the truck stop in Grovertown.
Visitation will be from in the Johnson – Danielson Funeral Home, 1100 N. Michigan Street, Plymouth on Tuesday, August 5th from 10:00 a.m. EDT until noon.
Funeral services will immediately follow at noon, officiated by Pastor Rick Loew of the Bible Baptist Church.
Burial will follow in New Oakhill Cemetery, Plymouth with military honors provided by members of the Plymouth American Legion Post 27, Veterans of Foreign Wars – Marshall County Post 1162 and the D.A.V.