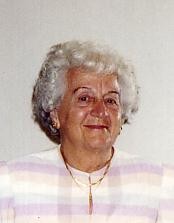 Former Plymouth resident, Jane John, 93, passed away, September 24th, in Bradenton, Florida. She was born April 21, 1915, in Bremen, Indiana to Charles N. and Lucinda Jane (Arnold) Hiester. She married Fred P. John in Bremen on January 30, 1937. He preceded her in death on April 12, 1986. The John’s were former members of the First Presbyterian Church. Jane was a long time hairdresser in Plymouth, and along with her husband they operated John’s Beauty Shop on Shalley Drive for 40 years. They retired to Bradenton, Florida in 1986.
Survivors include her two daughters, Karen (Bud) Morgan, Tulsa, Oklahoma, Janis (Dr, John) Petstcher, Madison, Ind., seven grandchildren and six great-grandchildren. Also surviving are three sisters and one brother; Berniel (William) Butler, Niles Michigan, Gretchen (Dean) Kimble, Bremen, Ind., Lana Huff, Indianapolis, Ind., Wendell Hiester, Saginaw, Mich., and a sister-in-law, Virginia (Ralph) Lechlitner.
Four brothers preceded her in death, Arthur, Woodrow, Robert, and Mahlon Hiester.
Services will be held on Wednesday, October 8th at 1 p.m. in the Johnson-Danielson Funeral Home, 1100 N. Michigan St., Plymouth where friends may call on Tuesday, October 7th from 5 – 7 p.m. and again one hour prior to services.
Entombment will be in the New Oakhill Mausoleum, Plymouth.
Memorial contributions may be made to a Hospice or Alzheimer’s Association.