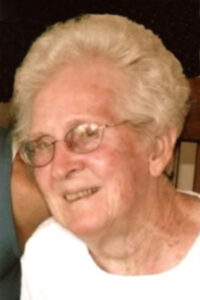 A service of remembrance for Jane H. Mannan will take place on Sunday, February 8th at 2 p.m. in the Johnson-Danielson Funeral Home with Rev. Charles Krieg officiating. Friends may gather one hour prior to the service to celebrate her life and a reception will immediately follow the service in the funeral home.
Preferred are memorial gifts to P.H.S. Athletics, 1 Big Red Drive, Plymouth, IN 46563 or the charity of the donor’s choice.
Jane, a longtime educator, passed away Tuesday evening in the Catherine Kasper Life Center at the age of 93.
Born in Morocco, Indiana on April 26, 1921 she was the daughter of Victor and Florence (Wright) Hancock. She was raised in Morocco and graduated from high school there.
On August 1, 1948 at her parent’s home, she became the bride of Robert W. Mannan. After 44 wonderful years together and having raised three children, Bob preceded her in death on June 30, 1992. They had spent many winters in the Haines City, Florida area and enjoyed a special trip to Alaska.
Jane was a respected teacher at Plymouth Lincoln Junior High for many years teaching six grade Language Arts. She received her teaching license and master’s degree from Indiana University having returned to school years after attaining her bachelor’s degree in Business Marketing at Bloomington.
She was active in the Plymouth Community and the lives of many as a member of the First Presbyterian Church, Delta Theta Tau Sorority, a continued Big Red Athletic Booster and a volunteer at the hospital and county museum.
Jane loved to golf, was an accomplished artist in water colors, great at sewing and knitting blankets for each of her grandchildren and also enjoyed bridge and euchre as well as playing the piano.
Her greatest joys were her children, grandchildren and great grandchildren. They are: daughter Betty J. and Jim Yoder of Bremen, IN and their children; Adam & Whitney Yoder with children Thayne & Maddie, Liza Yoder, Sam & Melissa Yoder with children Ryan & Nicholas, daughter Barbara J. and Dan Umbaugh of Carmel and their children Anna & Rob Witzig with children Will and Emma, Katie & Ty Aschliman with children T.J. and Makai, Laura & Brandt Booram with children Eli, Riley & Harper, and Lydia & Bob Fox with children Gracie & Caroline, son Robert W. “Bill” Mannan Jr. and spouse Ginny of Tucson, AZ and their children Nicholas & Addie. Several nieces and nephews also survive.
Preceding her in death were her parents, spouse, granddaughter Sarah Umbaugh and brothers Thomas, Bud and David Hancock.