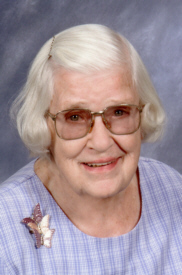 Jane L. Fruits, 96, of West Adams Street in Plymouth, passed away Saturday, October 31, 2015 in her residence. Jane was born in Mishawaka, Indiana on August 27, 1919 to Perry and Mary E. (Fear) Polley. Her family moved to Plymouth when she was 10 years old. Jane would graduate from Plymouth High School with the class of 1937.
Jane would marry Harold R. Fruits on May 7, 1942 in Plymouth. He would precede her in death on August 2, 1974. During WWII, she was employed at Kingsbury Ordance Plant and Meck Industry. She then worked for many years at the Plymouth Credit Bureau until retirement. Jane was an active member of Trinity United Methodist Church and a former member of United Methodist Women. She enjoyed working in her flower garden and was in awe of God’s creation of wild life, especially beautiful butterflies. She dearly loved visiting her family and playing with her grandchildren.
Surviving are her two sons; Larry H. Fruits, Plymouth, and Garah R. & Toni Fruits, Plymouth, six grandchildren and spouses; Anna Fruits, Thad and Crystal Fruits, Felicia and Brian Battaglia, Jon-Stephen and Jeanne Crackle, Felena and Aaron Chandler, and Charles and Brooke Fruits. Also surviving are ten great-grandchildren.
She was preceded in death by her parents, husband, and one brother; Herman J. Polley; who was killed in action in 1944 during WWII. Visitation for Jane will be held on Thursday, November 5, 2015 from 5-7 PM in the Johnson-Danielson Funeral Home 1100 North Michigan Street and from 10:00 AM until time of service on Friday at the church. Funeral services will be held at 11:00 AM on Friday, November 6, 2015 in the Trinity United Methodist Church, 425 South Michigan Street, Plymouth, with Rev. Maurice Grindle officiating.
Burial will follow in the New Oakhill Cemetery. Memorial gifts may be made to the Trinity United Methodist Church, 425 South Michigan Street, Plymouth.