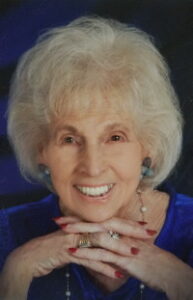 Janelle S. Parrett (born Rose Janelle Swilley), a resident of Plymouth, Indiana, and also of Sebring, Florida, passed away at home on June 27, 2019 at the age of 96. She was preceded in death by her parents, Edgar Rowan and Ada May (Boutwell) Swilley. Beloved wife of 57 years to the late Leslie Loring Parrett, D.V.M. She was also preceded in death by her sister Juanice Swilley Nyquist. She is survived by her two children: Ann Loring Parrett of Plymouth, Indiana and John Edward Parrett and his wife Lindsay of Orlando, Florida. Also grandmother to 4 grandchildren: Daisy, Danielle (and her husband Will), Jennifer & Lucas, and great granddaughter, Briar.
Janelle was born on November 20, 1922 in Meridian, Mississippi. She attended Meridian High School where she was a celebrated athlete, winning 2 state tennis championships, as well as state championships in basketball and ping-pong. She graduated with a B.S. in Physical Education and English from LSU in 1945, and an M.A. in Physical Education from Ohio State, where she was also an instructor and cheerleading coach from 1945-1949. Janelle met her husband at Ohio State, where he was getting his doctorate in veterinary medicine. They married on June 8, 1947. Jan and Les moved to Plymouth, Indiana where they started a veterinary practice together that still bears their name. Janelle taught and coached for over 30 years in the Plymouth public schools. She held numerous leadership positions, including Chairman of the Indiana Alliance for Health, P.E. & Recreation. She was also President of various golf associations, and won the Plymouth Country Club Womenâ€™s golf championship. She resided in Sebring, Florida for 31 years, was an avid bridge player, and was a member of Covenant Presbyterian Church. Janelle sought out leadership positions in every activity she pursued, including serving as President of the Sun â€˜n Lake Womenâ€™s Golf Association, HOA Board President, among others. Janelleâ€™s dad nicknamed her Olâ€™ Top because of her tireless energy and enthusiasm for sports and for life. A private family service will be held in Sebring at a later date. She will be interred at Lakeview Memorial Gardens in Sebring, FL. Memorials may be made to your local chapter of Hospice or Covenant Presbyterian Church, 4500 Sun ‘n Lake Blvd., Sebring, FL 33872.