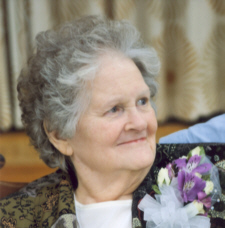 Janet Barenie, 80, died of natural causes at 9:30 a.m. on Sunday, August 29, 2010, in the Catherine Kasper Home. Born in Hebron, Indiana, on May 29, 1930, she was the daughter of Oliver and Gertrude Gilson Berdine.
On April 30, 1948 she took Alfred “Chuck” Barenie as her husband, he preceded her in death on November 8, 1989.
Janet worked for the Poor Hand Maids of Jesus Christ of Ancilla Domini assisting her husband the poultry farm manager, and later worked as their receptionist.
She loved to read, travel and spending time with her family and friends, she was an avid watcher of Dancing with the Stars, and enjoyed having conversations about the show with her friend Shirley.
Janet was a member of St. Michael Catholic Church.
She is survived by a daughter Claudia & Thomas Hawk of Plymouth along with their daughter Kimberly Hawk; four sons and their families, Dave & Jennifer Barenie of Wanatah and children Tracey J. Doherty, Troy Barenie, and Tricia Werner; Jeff & Lisa Barenie of Culver; Rich & Mary Barenie of Plymouth with children Karen Bright and Susan Kuskye; and Shawn & Nicole Barenie with children Chase, Chandler, and William Barenie.
Also surviving are four great grandchildren, Tony Bright, Kayden Doherty, Brennen Doherty and Tenley Werner
Preceding Janet in death are her husband, parents, grandsons Joseph and Jeffrey, four sisters Leanna Jewel, Charlotte Nimetz, Fond Berdine, and Bealuh Brant, along with three brothers Harry, Max and Don Berdine
Visitation for Janet will be on Wednesday, September 1, 2010 from 4 to 9 p.m. EST in the Johnson-Danielson Funeral Home 1100, N. Michigan Street, Plymouth. A rosary will be prayed at 8 p.m. EST.
Calling will continue one hour prior to a Mass of Christian Burial on Thursday, September 2, 2010, at 11 a.m. in the Catherine Kasper Chapel. The Reverend Father Ed Konerman will officiate.
Interment will be in the Chapel Lawn Cemetery, Schererville, Indiana at 1:30 p.m. EST.
Memorial gifts may be given to the Center for Hospice Care or the Catherine Kasper Nursing Home.