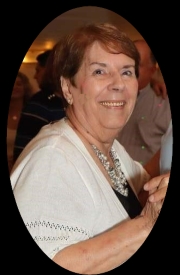 Janet Helen Smith, aged 80, passed away surrounded by her family at 5:22 pm on May 16th, 2019 at St. Joseph Regional Medical Center in Mishawaka, from complications following surgery to treat injuries sustained in a fall.
She was born on November 30, 1938, in Hammond, IN to Edward Herman Adelsperger and Helen Verona (O’Renick) Adelsperger. Jan married William Smith on January 10, 1959, in Hammond, IN and together they raised three children, Dina, Timothy, and Bradley.
Jan worked as a teacherâ€™s aide at Jefferson Elementary School in Plymouth, IN for many years and spoke fondly of many of the students she worked with. She enjoyed traveling with her husband and visited many states, including trips to Alaska and Hawaii. She also traveled abroad, visiting the Bahamas, Canada, Austria, Switzerland, Liechtenstein, and Germany, where she attended the Oberammergau Passion Play in 1990 with her good friend Ines Dragani and others from Jefferson Elementary.
She was an avid reader of mystery novels and enjoyed watching Hallmark movies. Playing euchre and bunko were favored pastimes, and she was an avid bird watcher who always kept several feeders stocked with seed outside her kitchen windows. She was an animal lover, and deeply cared for her schnauzer Fritz and her cat Mr. B. She also regularly gathered with friends to socialize at what they jokingly called â€œBored” Meetings. She was known for her “world famous potato salad” which was loved by her family. She initially had some objections when Bill purchased a classic â€™57 Chevy Bel-Air convertible, but she still became a member of the Hoosier Old Wheels club and regularly attended club get-togethers along with her husband.
Jan was a loving wife, mother, and grandmother who was especially proud of her three grandchildren. She was thrilled to be able to meet her great-granddaughter born in February of this year. Those left to mourn her passing include her husband of 60 years, Bill Smith; her loving children, Dina (Walter) Pintal, Timothy (Jill) Smith, and Bradley Smith, all of Plymouth; her sisters Sandra McCauley of Granger, IN and recently Las Vegas, NV; and Lorry (Bill) Greco of Griffith, IN. She is also survived by her grandchildren Sam (Rachel) Smith and their daughter Joslyn Hope of Vicksburg, MI; Megan Pintal and Matthew Pintal of Plymouth, her sister-in-law Joan Smith, and numerous nieces and nephews.
She was preceded in death by her parents and her younger brother Craig Adelsperger; brothers-in-law Don McCauley, Al Smith and Bud Pugh; and sisters-in-law Anna Marie Pugh and Dee Varshall.
Visitation will be held on Monday, May 20, 2019, from 4:00 pm to 7:00 pm at Johnson-Danielson Funeral Home located at 1100 N. Michigan St., Plymouth, IN 46563.
Services will be held on Tuesday, May 21, 2019, at 11:00 am at Johnson-Danielson Funeral Home with Father John S. Korcsmar, CSC officiating. Burial will follow at New Oak Hill Cemetery.
The family requests that donations be made in Jan’s name to the Multiple Sclerosis National Headquarters 375 Kings Highway North Cherry Hill, New Jersey 08034 in lieu of flowers.