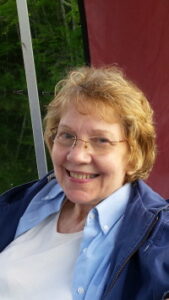 Janet Perschbacher, 75, passed away on Thursday July 23, 2020 at Miller’s Merry Manor, Plymouth. She now resides in heaven!
Born on March 19, 1945 to Harley and Margaret Baughman in Plymouth, Indiana. She graduated from Tyner High School in Tyner, IN with the class of 1963. Janet was a natural caregiver and continued her education to become an LPN. Janet spent 2 years as a nurse at Redbird Mission in Beverly, Kentucky. It was an experience that she cherished for the rest of her life. Janet married Steve Perschbacher on April 26, 1969 and together had two children. She worked as a nurse at Pilgrim Manor for several years. She eventually became the secretary for her husband’s business, Northern Indiana Cash Register Company. They made a good team and enjoyed working together. Janet was an active member of the Plymouth Wesleyan Church for many years. She was a member of the choir and enjoyed being a part of the many productions they put on. Her Christian faith was an essential part of who she was and how she lived her life. She enjoyed her walks around the lake, reading to her grandchildren and spending time with her family. She was a devoted wife, caring for her husband for many years after a stroke. She was also a loving and patient mom and grandma that will be dearly missed. Janet is survived by her children; Julie (Dale) Pritchard of Plymouth, IN and Andy (Sarah) Perschbacher of Plymouth, IN; brothers, Gerry Baughman of South Bend, IN and Roger (Sandy) Baughman of Florida; sisters, Marty (Rick) Derf of Grand Haven, MI, Karen Correll (Garth Hunter) of South Bend, IN and Jean (Tom) Banks of South Bend, IN; Grandchildren: Evan, Karys, Dori and Reid, Victoria and Miles. She is preceded in death by her parents and her husband. A private celebration of life will take place at a later date.