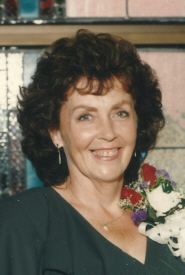 The family will receive friends on Saturday, May 20th from Noon â€“ 1:30 p.m. EDT in the Johnson-Danielson Funeral Home, 1100 N. Michigan St., Plymouth. A Service of Remembrance will begin at 1:30 p.m. in the funeral home with Rev. Charles Krieg officiating.
Preferred are gifts made in Janâ€™s memory as a cancer survivor to the Cancer Association of Marshall County, c/o 9739 Sunnyside Drive, Plymouth, IN 46563. _______________________________________________
Janice D. â€œJanâ€ Badell, 80, of Plymouth, passed away Friday evening of natural causes in the St. Joseph Regional Medical Center â€“ Plymouth Campus.
Jan was born in Chicago, Illinois on January 9, 1937, the only child of Adam D. and Esther E. (Larson) Oliver. Her first two years of high school were at Mount Greenwood High School, completing the next two years at Jones Commercial School of Business and Commerce in downtown Chicago and graduating with honors in 1955.
This Badell family story began in the summer of 1953, where Jan met Doug at Bass Lake, Indiana, and an unbreakable bond was formed that endures today. The two were married on July 30, 1955 at Mount Greenwood Methodist Church in Chicago.
A brilliant self-taught artist, Jan was accepted into the Art Institute of Chicago and specialized in oil and charcoal painting. Shortly after, family duties called and that path was turned into one of motherhood when the couple learned of the impending birth of their first child, Jeff. Jan lived with her parents and went to work at Illinois Continental Bank in Chicago while Doug was in Bloomington working on his undergraduate degree. The next step in their venture took them to Shaker Heights, Ohio, where Doug worked as a physical therapist at the Cleveland Clinic while Jan gave birth to their second child, Kim. Two years later, it was back home to their beloved Indiana, this time to Speedway where the young family made their home while Doug attended dental school. Jan attended to their two small children and worked full time for a group psychiatry practice.
The young family resided in Knox, Indiana for the first five years after Doug’s graduation and while there, their third child, Pam, was born. A year later, they established their home and dental practice in Plymouth. There, Jan and Doug worked together for decades building Doug’s practice, and welcomed son Jeff as a partner in 1982. Jeff continues the practice today.
Self-professed as “small, but mighty,” Jan completed ground school and solo flight, earning her student pilot’s license in 1975. A lifelong supporter and fan of IU, the couple traveled to the football games to cheer on the Hoosiers and this commitment was passed on to all three of her children, all graduating from IU and two from the IU School of Dentistry. She was an avid golfer, playing on multiple competitive golf teams over the years. This love for golf took the couple to spend their winters at their Mesa, Arizona home for the last 25 years.
And then there were Jan’s grandchildren. From the moment each was born, she was there and they became part of her heart. She stayed with each one for weeks, watching them breathe as they slept, referring to each as “my baby.” They were her everything and they felt it. Her fierce commitment and unconditional love was palpable to them and will sustain them for a lifetime. Upon learning of Jan’s passing, her friend Jane, whose husband Bill was a dental school classmate of Doug’s, wrote this: “My friend of nearly 60 years is on her journey to Heaven. I learned so much from her. Even though we were far apart, we were still close. She taught me how to cook, play cards, and how to cope being married to a dentist. Jan was devoted to her children and grandchildren and their accomplishments. She was loving, kind, and full of happiness She was my mentor and what I striped to be. I will miss my friend Jan but know she is in Heaven and we will have endless talks one day. My friend forever.”
Surviving is her husband Doug, three children and their families. They are: Dr. Jeff (Lisa) Badell of Plymouth and children; Dr. Jillian (Scott) Brady and Jay Badell, Dr. Kim (Dr. Brad) Wilson of Jasper, IN and their children Dr. Brant Wilson, Pete Wilson, and Hailey Wilson, and Pam (Jim) Fasteen of Louisville, KY and their children; Tess, Jack, and Chet Fasteen.