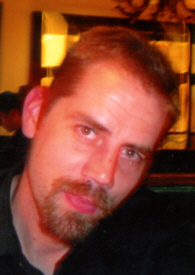 Jarrod August Ball, 38, a resident of Greensboro, North Carolina for the past ten years, passed away at his home on October 3, 2014. Jarrod was a former resident of Rochester, Indiana.
He was born in Plymouth, Indiana on April 8, 1976, the son of Barton N. and Cheryl A. (Peters) Ball. Jarrod was a 1994 graduate of Rochester High School.
For the past eight years he served as a computer tech for Teklinx, Inc. of Greensboro.
Jarrod enjoyed playing his guitar and listening to music along with camping and outdoor activities. He held a collection of the Audubon Society Field Guides to North America and since a young boy he enjoyed studying the world of nature. He also liked attending NASCAR auto races.
Jarrod is survived by his parents Bart and Cheryl Ball of Rochester, his brother Brad B. Ball of Washington, DC, great aunt Esther (Wilmer) Peters of Niles, MI, aunts and uncles; Jane (Peters) and John Silvey of Pendleton, IN, Gary Peters of Grand Rapids, MI, Barbara (Ball) and Clifford Ferguson of Plymouth, Kim Ball of Bangkok, Thailand, several cousins and special friend Amanda Poer of North Carolina.
He was preceded in death by grandparents Barton and Elsie (Brown) Ball, Elmer and Evelyn (Marks) Peters and a cousin Terry L. Hawkins.
Family and friends will come together from 10:30 – 11:30 a.m. on Friday, November 7th at the New Oakhill Cemetery Chapel in Plymouth. A celebration of his life will begin at 11:30 a.m. in the chapel led by Pastor Mike VanHeyningen of the First Christian Church DOC in Rochester.
Burial will immediately follow in the Memorial Gardens of New Oakhill Cemetery.
Memorial gifts may be made to the American Diabetes Association, c/o 10872 Queen Road, Plymouth, IN 46563.