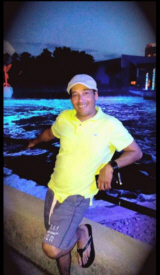 Javier O. Mejia-Chiham, 46, passed away unexpectedly of natural causes Saturday evening in the St. Joseph Regional Medical Center – E.R. Formerly of Plymouth, Javier has resided on W. 1st C Road in Walkerton for the past four years.
On July 2, 1969, Javier was born the son of Miguel Mejia Erazo and Margarita Chi-Ham Mejia in Tegucigalpa, the capital of Honduras. His parents survive in Honduras. Javier completed his high school education in Honduras. He was wed to Shelia R. Merry in Plymouth on December 9, 1994.
Javier worked in production at the Plymouth Pregis Corporation for over 20 years.
He will be remembered as a loving and caring person who gave great hugs to his family and friends. Hosting gatherings where he could cook on the grill made Javier very happy as he also enjoyed playing the acoustic guitar. He liked four wheeling along with operating and fixing radio controlled cars.
Surviving along with his wife Shelia are two children; Justin Russell Mejia and Thinaung of Walkerton and Abri Ana Mejia also of Walkerton, two sisters; Lorna (Santiago Sota) Mejia and Anita Mejia-Chiham and one brother; Miguel Mejia-Chiham all of Honduras.
He is also survived by his in-laws and family; George & Judy Schlegel of Argos, Tony & Dawn Cortina of Crown Point and Rocky & Brandy Whitaker of Argos along with several nieces and nephews and dear friend Hector Javier Nunez of Miami.
Family and friends will gather at the Johnson-Danielson Funeral Home 1100 N. Michigan St., Plymouth on Tuesday February 2nd from 4 – 7 P.M. EDT. Funeral services will immediately follow at 7 P.M. in the funeral home.