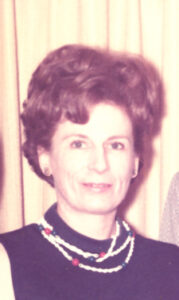 Jean E. Burden, 12 B Road, Argos, Ind., died in Miller’s Merry Manor, Plymouth, at 5:50 p.m. on Saturday, September 1, 2007.
Jean was 84-years old.
She was born in Floyd, New York, the daughter of Nicholas and Cleora Brimson Soule, on November 28, 1922. She graduated from the Oreskany, New York High School.
On July 11, 1946, in Stittsville, New York, Jean and Dennis W. Burden were married.
Jean retired from Young Door Co. in 1984.
An avid bowler, she also enjoyed gardening.
She was a member of the Plymouth V.F.W. Auxiliary.
Jean is survived by Dennis, her husband of 61 years, Argos, and by their son and daughter-in-law, Wesley and Josephine Burden, Plymouth, and by their daughter, Linda Burden, Berkley, Calif.
Two granddaughters, Gwyn and Brittany Burden, both of Plymouth, also survive, together with a brother, Bob Soule, Oriskany, New York, and a sister, Betty Koenig, Rome, New York.
Jean was preceded in death by her parents and a brother, George Soule.
Friends are invited to celebrate the life of Jean Burden with her family from 5 to 7 p.m. on Wednesday, September 5, 2007, in the Johnson-Danielson Funeral Home, 1100 N. Michigan St., Plymouth.
Funeral services for Jean will be at 10:30 a.m. on Thursday, September 6, 2007, in the funeral home. The Rev. Dr. E. Dean Fager, pastor of the First United Methodist Church of Plymouth, will officiate.
Burial will be in the New Oak Hill Cemetery, Plymouth.
Memorial gifts in Jean’s memory may be made to the Center for Hospice and Palliative Care of Marshall County, a Parkinson’s Support Group or the American Cancer Society-Marshall County Chapter.