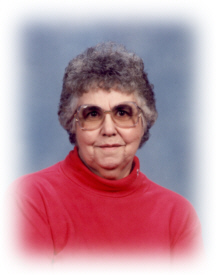 V. Jean Gilbert, 82, a lifetime Plymouth resident, passed away at 12:30 p.m. Sunday, December 4, 2011 in the St. Joseph Regional Medical Center – Plymouth Campus of natural causes. Jean has resided on 12th Road for the past 58 years.
Jean was born the daughter of LeRoy and Anna Viola (Cannan) Belt in Plymouth on September 4, 1929. She was raised during the Depression by her grandparents; Ed and Jennie Cannan. She attended Inwood School and graduated from there in 1946.
On November 25, 1947 at Inwood she became the bride of Navy veteran, Richard F. Gilbert. “Bing” would precede her in death on July 10, 1988.
Jean was a mother and homemaker who also volunteered with the Marshall County Historical Museum for many years. She had a great appreciation for Genealogy research, was a postmark and stamp collector and enjoyed reading. She was patient and kind to those she assisted and truly enjoyed remaining connected with classmates at their monthly breakfasts.
Jean would attend New Song Community Church of Plymouth with her family.
She is survived by two daughters and their families: Mary Ann and Larry Neff and their children, Kim (Rich) Dills, Stacy Neff and Brian Neff. Sharon K. and Tom Selner and their children, Andrea (Paul) Amor, Jeff (Quinn) Selner and Mark Selner. Twelve great grandchildren complete her immediate family.
Also surviving are Jean’s two sisters; Judy (Dale) McCollough of Bourbon and Danice (David) Harding of Middlebury, IN and numerous nieces and nephews.
Preceding in death were her parents and step-father, Ben Gilley, a sister, Marlene Kay Holem and a brother, Richard Belt.
Visitation will be held on Thursday, December 8th from 4 – 8 p.m. in the Johnson-Danielson Funeral Home, 1100 N. Michigan Street, Plymouth. Services will be held in the funeral home on Friday, December 9th at 10:30 a.m. with the Rev. Justin Chambers, pastor of New Song Community Church.
Jean will be laid to rest next to her husband Richard at the New Oakhill Cemetery in Plymouth.
Memorial gift may be made to the Marshall County Historical Museum, 123 N. Michigan Street, Plymouth, Indiana 46563