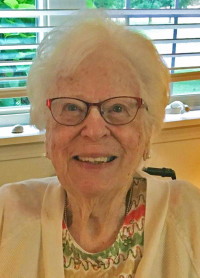 Born at Epworth Hospital, South Bend, Indiana on April 23, 1924, Jean was the daughter of Herbert K. Laramore and Muriel Bosworth Laramore of Knox, Indiana. In 1924 she moved to Plymouth, Indiana and graduated with the class of 1942 from Lincoln High School. She received her Bachelor’s Degree in Education from De Pauw University in 1946.
On June 22, 1947, Jean married George W. Schricker (the youngest son of Governor Henry Schricker and Maude Brown Schricker). Jean and George had two children, Sara and George Jr. While living in Plymouth, Jean taught physical education in Warsaw, and following that she taught in Tyner, Plymouth, and Culver, Indiana. In 1966, the family moved to Indianapolis where Jean taught Science at Wannamaker Elementary School and received Teacher of the Year in 1972. One of her favorite science projects involved the hatching of baby chicks in her 6th grade classroom.
Jean and George moved back home to Plymouth, Indiana to retire in 1988. They built their home just outside of town and created a wildlife refuge, planting hundreds of oak and pine trees on the property. Jean loved watching the deer and turkeys wander through her backyard and loved hosting family and friends for meals on her screened-in back porch.
Jean belonged to Tri Kappa both in Indianapolis and Plymouth. She was a member of Alpha Delta Kappa, an honorary teacher sorority.
Jean was a member of Irvington United Methodist Church in Indianapolis, Indiana and First United Methodist Church in Plymouth where she participated in the Tyra Constance Guild and received the Blondena Kaiser Award.
Jean was a cancer survivor having contracted colon cancer in 2001. Jean loved to travel and made trips to Alaska, Hawaii, Europe, and South America.
Jean is survived by her daughter, Sara Klein and her husband, Jonathan, of Park City, Utah, their two daughters, Deborah Klein, and her daughter Emma, of Los Angeles; Melissa Klein, her husband, Brian Winston, and their children, Rebecca, Zack, Jack, and Sam, of Holliston, MA; Sara and Jonathan’s two sons, Benjamin H. Klein, his wife, Claire, and their two children, Eva and Natalie Jean, of Oakland; Avram D. Klein and his wife, Carol Turner, and their two children, Ruby and Annabelle, of Los Angeles. Also surviving is her son, George W. Schricker Jr., his wife, Michele of Plymouth, their son, Ezra Schricker, his wife, Audrey, and their son, Leo, of Columbus, Ohio.
Jean was preceded in death by her parents, her husband George in 1992 and her brother Bill Laramore in 2011.
Jean donated her body to Indiana University Medical School, as did her husband. Jean was a marvelous mother and wife and believed most readily in the New Testament idea that all religion could be simplified to the idea, “God is Love.” The family is grateful for everyone who helped care for Jean, especially Cindy Fishburn, Cammie and Caitlyn Calhoun, Kristi Bennett, Debbie Bush, Rebecca McCombs, Pam Lamb and the staff at both Miller’s Merry Manor (Assisted Living), and Center for Hospice Care. A memorial will be held in Plymouth honoring Jean’s life when it becomes prudent for the family to fly in for the gathering.
Memorial Contributions can be made to these organizations in Plymouth, Indiana (46563): Center for Hospice Care, 112 S. Center Street; First United Methodist Church, 400 North Michigan, or The Marshall County Community Foundation, 2680 Miller Drive, Suite 120, P.O. Box 716.