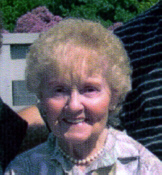 If there is dancing in heaven — and she was sure there is — Jeanette Abene, 89, will be in the line up.
She danced all her life, this diminutive Chicago native who moved to Plymouth from Indianapolis two and a half years ago, was also a former resident of Des Plaines, Ill.
“When I was 16,” she said in an interview a year ago, “I was a singer and tap dancer.” A lover of ballroom dancing, she was particularly fond of the cha cha.
Jeanette died, appropriately enough, on a day of celebration, Easter Sunday, March 27, 2005, at 6:10 p.m. in the Saint Joseph Regional Medical Center, Plymouth. Born in Chicago, Ill., the daughter of Rosario and Catarina M. (Bellizia) Candella, she received her education in Chicago schools.
On March 23, 1935, in St. Phillips Catholic Church in Chicago, she married Gaspare Anthony Abene. Her devoted husband of 64 years died in 1999.
More than a homemaker, she was a happy, friendly person who enjoyed people and activities of all kinds. Music filled her life. She played violin in the Berwyn Symphony Orchestra and was a pianist and organist.
She was a member of St. Michael’s Roman Catholic Church and the Moose Lodge in Plymouth.
Jeanette is survived by two children. Her son and daughter-in-law, Dr. Robert and Patricia Abene, live in Plymouth with grandson, Andrew K. Abene.
A daughter and son-in-law, Rita C. and E. Thomas Bowers of Charlotte, N.C., have two children; grandson, William H. and Marcelle Brown of Chapin, S.C. and great-grandsons, Spencer and Austin. Jeanette’s granddaughter, Bonnie J. Brown, and two great-granddaughters, Kylie and Cameron live in West Hills, Calif.
Jeanette was preceded in death by her parents, her beloved husband and a brother, Philip Candella.
Jeanette’s family will welcome friends to celebrate her life from 4:30 to 8 p.m.(EST) on Wednesday, March 30, 2005, in the Johnson-Danielson Funeral Home, 1100 N. Michigan St., Plymouth, Ind.
A rosary will be prayed at 5 p.m. Wed. in the funeral home.
A Mass of Christian Burial for Jeanette will be held on Thursday, March 31, 2005, at 11 a.m.(EST) in St. Michael’s Roman Catholic Church, 611 N. Center St., Plymouth, with visitation from 10 – 11 a.m. The Rev. Father William Kummer will officiate.
A special entombment prayer service will be held in the main chapel of All Saints Cemetery, 700 N. River Road, Des Plaines, Ill., at 11 a.m. (CST) on Friday, April 1, 2005.
Memorial gifts in Jeanette’s memory may be made to the St. Joseph Health Center 116 E. Washington St. Plymouth.