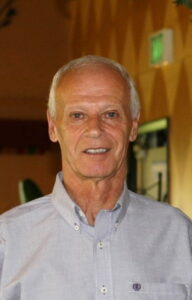 Born on October 20, 1940 in Plymouth, Indiana he was the son of Newell W. and Myrtle M. (Patricia) Hartman Yoder.

He attended Plymouth High School graduating with the class of 1958, where he exceled in tennis and baseball. He served in the US Army National Guard for six years, training at Fort Ord, CA and attended Ball State University. Jeff loved his work and spent his entire career in various roles within the local orthopedic industry, traveling throughout the country. He was a member of the Phi Delta Kappa Fraternity, active in the American Legion, and played in several golf leagues. He lived many of his retired years in Leesburg, Florida where he enjoyed sunny weather, frequent golfing, and socializing in his retirement community. Jeff had a passion for college football and basketball with a preference for Notre Dame, following his grandchildren in sports, NASCAR racing, discussing current events, giving advice to family, and was well known for his friendliness, good conversation, and sense of humor.

Also surviving are five siblings including Steve (Marcia) Yoder of Sarasota, FL; Jim (Betty) Yoder of Bremen, Phil Yoder and Nickie (Dennis) Weidner of Plymouth, and Kristy (Louis) Spaid of Wheatland, WY; along with many nieces and nephews.

Jeff is preceded in death by his daughter Jill Carpenter, granddaughter Madelyn Eads, wife Sharon Stine Yoder, and his parents.

Visitation will be held on Sunday, January 15, 2023 from 12-2 pm at the Johnson-Danielson Funeral Home, 1100 N. Michigan Street, Plymouth. A Celebration of Life will follow at 2 p.m. with Life Celebrant James Smart officiating.

Family burial will be in the New Oak Hill Cemetery, Plymouth.

Memorial contributions can be made to the Jill Carpenter Memorial Scholarship Fund through the Marshall County Community Foundation, 2680 Miller Drive, Suite 120, PO Box 716, Plymouth, IN 46563.