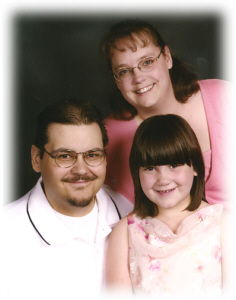 Jeffery J. “Jeff” Cygert, of Roosevelt Rd., Walkerton, died from complications of congestive heart failure in the Cleveland Clinic, Cleveland, Ohio, at 4:30 a.m. on Tuesday, June 28, 2005.
He was a 32 year old man devoted to his family and faith in his Almighty Father. Born in South Bend, Indiana on February 10, 1973, Jeff is the son of Alan Cygert and Patricia (Smith) Newgent and a 1991 graduate of New Prairie High School.
On August 22, 1998, in the Koontz Lake Missionary Church, Jeff and Jennifer L. Reese were married and have made Walkerton their home for the past five years. For three years he had worked at the Juvenile Justice Center in South Bend. Jeff always had a desire to serve the public as a firefighter, but his health would not permit that to happen. For the past six years he was a dispatcher for the Marshall County Sheriffs Department.
A great fan of the Chicago Cubs and Bears, he was also an avid supporter of Notre Dame football. He enjoyed fishing, golf and MAYGAN. The family will long remember their March ’05 trip to Disney World in Florida. He appreciated a good movie and country music.
He sang tenor in the choir of the Koontz Lake Missionary Church and was a member of Promise Keepers and the Fraternal Order of Police No.135
Jeff is survived by his wife, Jennifer and by Maygan A. Cygert, their five-year-old daughter, his mother Patricia Newgent of Mishawaka and father and step-mother, Alan and Debra Cygert also of Mishawaka. His mother-in-law and father-in-law; Marsha (Dare) and Gene Reese reside in Walkerton.
A sister, Jill Cygert, Mishawaka, also survives, together with three step-sisters: Michelle Anastasio, Granger; Desiree McDaniel, Mishawaka and Tina Mauer, Indianapolis.
Two brothers-in-law, Scott E. and Ingrid Reese and Ryan C. Reese and Melody, all of Walkerton also survive. Jeff’s maternal grandparents, Beverly and Robert Smith, South Bend, several aunts, uncles, nieces, nephews and cousins, survive as well.
Jeff was preceded in death by his paternal grandparents, Alex W. and Anne F. Cygert and by his step-father, Joseph Newgent.
Friends will be welcomed to call on Friday, July 1, 2005, from 5 to 8 p.m. at the Johnson-Danielson Funeral Home, 1110 N. Michigan St., Plymouth.
Funeral services, conducted by the Rev. Brian Baughman, pastor of the Koontz Lake Missionary Church, will be held at 8 p.m. on the evening of Friday, July 1, 2005, in the funeral home.
A burial service will be held at 9 a.m. on Saturday, July 2, 2005, in the Morris Park Cemetery, U. S. Hwy. 6 west of LaPaz, Indiana.
Preferred memorial gifts may be made to the Jeff Cygert Memorial Fund at any Teachers’ Credit Union or the funeral home.