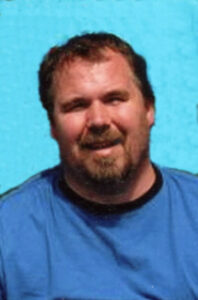 Jeffery L. “Muttly” Roeder, 50, passed away unexpectedly of natural causes on Wednesday, July 16, 2014 at 4:15 p.m. in the St. Joseph Regional Medical Center- Plymouth Campus. Jeff was born in Mishawaka, Indiana on May 21, 1964 to LeRoy A. and Judith K. (Fisher) Roeder. He graduated from Bremen High School with the Class of 1982. Jeff married Cindy L. Anderson on September 30, 1989 at St. Paul’s Lutheran in Wyatt, Indiana. Known for his expert skills and quality, he worked with his father-in-law, William L. Anderson and formed A&R Drywall Co. of Plymouth. He worked for over twenty years until his health no longer allowed him to do so being diagnosed with Multiple Sclerosis. Jeff always volunteered to help others, he enjoyed camping with his family and friends, watching NASCAR, picking on people and spending time with his dog Cocoa. A farmer at heart, he was involved with 4H Livestock Program and would have enjoyed fair week at Argos. He also enjoyed lawn maintenance; he and son Matthew jokingly formed “R & R Lawn Care” where their only customer was his mother. Jeff is survived by his wife Cindy, his mother Judith, his daughters Tonya M. Roeder and Ashley A. Roeder and son Matthew W. Roeder all of Plymouth. Brothers Scott A. and wife Chris Roeder of Greenwood, IN, Robert T. and wife Wendy Roeder of Bremen, IN, survive as well as his father-in-law William L. Anderson of South Bend, his sister-in-law Wendy L. and husband Lee Stevens of Bourbon and eight nieces and nephews. He was preceded in death by his father LeRoy and his mother-in-law Sharon A. Anderson. Family and friends will gather at the Johnson-Danielson Funeral Home, 1100 N. Michigan St., Plymouth on Sunday, July 20, 2014 from 1-4 p.m. Funeral Services will be held in the funeral home following the visitation at 4 p.m.
Preferred memorial gifts may be made to the Children’s Scholarship Fund through any Lake City Bank or the funeral home.