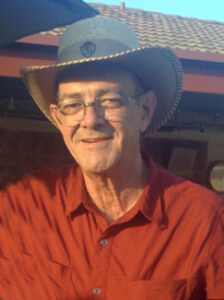 Jeffrey L. Hollett, 71, of Garland, Texas, passed away on December 14, 2014, in the comfort of his daughter’s home, surrounded by his loving family. Jeff was born on June 15, 1943, in Plymouth, Indiana, to Scott J Hollett Sr. and Helen M (Brugh) Hollett. He graduated from Plymouth High School in 1961. After graduation, he married Glenda S. Starner. He worked in the family business, Scotty’s Hydraulic Service until 1982 when he moved to Texas. Jeff quickly adapted to the laid back lifestyle of Texas. A lifelong dream was fulfilled when Jeff became an artisan knife maker. His knives have been featured in The Knifemakers Guild, Blade World, and Knife World Magazines. They can be seen on the website: www.kustomknives.com. Jeff made his first knife at the early age of 11. He went on to make collector’s knives and had a large following of buyers from all over the world. His motto was “Strong Honest Knives for Strong Honest Men”.
Surviving is his son Ted (Argos, IN) and his children, Caleb, Courtney, Ethan and Erin; daughter Pamela (Mesquite, TX), and her children, Blair, Preston and Jacob; and son Tom (Colleen) (Mesquite, TX), and their children, Alyssa, Chloe, Alex, and Shaela Hollett. He is also survived by two great-grandchildren and many nieces and nephews. Jeff is survived by his mother Helen Hollett and his brothers, Scott J. (Martha) Hollett (South Bend), Bruce (Melody) Hollett, Fred (Julianne) Hollett, and his sister, Georgia (Susie) Shez all of Plymouth. Jeff was preceded in death by his daughter, Debra Lynn and his father.
Jeff donated his body to science. A memorial service was observed on December 20, 2014 in Mesquite, Texas. The service was held at Lakepointe Church, with his granddaughter, Blair Claypoole, officiating. A memorial service in Plymouth is planned for a future date and will be announced. He lived a very simple life so he could help those less fortunate. Jeff’s passion was caring for the homeless in the Dallas area. Jeff routinely visited them sharing his time, talents, treasure and love of God. He will be missed.
Memorials may be offered to the Salvation Army or your local Hospice.