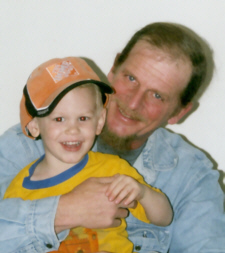 Jeffrey “Jeff” Van Blaricom, Sr., 13724 4th Road, Plymouth, died at 6:25 a.m. in Saint Joseph Regional Medical Center, Plymouth, on Friday, August 29, 2008.
Jeff died following a courageous battle against cancer. He was 48 years old.
Born in Plymouth on April 27, 1960, Jeff was the son of Raymond P. Van Blaricom and Dora Ann (Dixon) VanBlaricom.
He graduated from LaVille High School with the class of 1978.
On May 28, 1978, in Walkerton, he and Lorrene Haines were married.
Jeff owned and operated a boat manufacturing company in Bradenton, Florida. He moved back to Indiana in August of 2007.
He enjoyed Tony Stewart and Nascar racing, doing yard work and taking care of his grandbabies. He loved riding his Harley Davidson, playing poker and sitting with friends and family around bon fires.
Jeff is survived by his wife, Lorrene and by their three sons: Jeffrey Van Blaricom, Jr., Plymouth, Ind.: Chad William Van Blaricom, Westville, Ind. and Raymond Earl Van Blaricom, Plymouth, Ind.
His parents, Raymond P. and Dora Ann VanBlaricom, both of Plymouth, sister, Pamela (Kevin) Fleck, LaPaz, Ind., and two brothers: Donald Vernon ( Patty) Van Blaricom, Plymouth and Raymond Paul Van Blaricom, survive as well.
Jeff’s grandmother, Esther VanBlaricom, of Plymouth, also survives along with Doris Haines, his mother-in-law.
Two-sisters-in-law, Doreen (Bill) Wallace and Sidney (Terry) Anders, all of Plymouth, survive.
The lights of his life, his two grandsons, Jordan Kyle and Nicolas Allen VanBlaricom, also will miss him terribly.
Friends are invited to share their memories with his families on Wednesday, September, 3, 2008, from 11 a.m. to 1 p.m. at the Johnson-Danielson Funeral Home, 1100 N. Michigan St., Plymouth.
Funeral services for Jeff will be held following visitation at 1 p.m. in the funeral home. Tom Padberg., of The Center for Hospice and Palliative Care, Inc., will officiate.
Burial will be in New Oakhill Cemetery, Plymouth.
Memorial contributions may be made to the Jeffrey Van Blaricom Family.