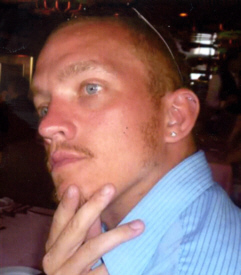 Jeremy A. Blackburn, 29, went home to be with the Lord after a courageous battle with brain cancer on Friday morning, February 6, 2015.
Jeremy was born in Chicago, Illinois on January 13, 1986 to Sonya L. Hickman. He graduated from Warsaw High School with the class of 2005.
He had a loving spirit, and after high school volunteered with the non-profit organization, Water for Good, which helped get clean water to the children in Africa. He also worked as a server in the restaurant industry for many years.
Jeremy overcame many obstacles as an infant and life struggles as an adult, but in spite of those challenges, he still loved people well and lived his life with so much passion. He was the greatest brother, being notorious for late night phone calls. He was an amazing son and was a friend to everyone. Jeremy was the glue that got the family together for the holidays and enjoyed cooking, beef stroganoff being his specialty. He was an avid runner, and he also loved the Chicago Cubs, the Bears and the Bulls. As a child he was a member of the Community Full Gospel Church in Plymouth. In his adult years, he attended the Winona Lake Grace Brethren Church, where he was a member of the church’s softball team, serving as the pitcher and 2nd baseman.
Jeremy is survived by his mother and step-father, Sonya and Dennis Hickman, and his siblings: Eddie Rand of Plymouth, Arielle Blackburn of Bourbon, Stephen Roberts of Kissimmee, FL, Kenneth Gutshall of Chicago, and Rebecka Gutshall of Chicago; maternal grandmother, Barbara Blackburn of Culver; aunt, Anna (Dan) Seago of North Judson; uncle, Tom (Maria) Blackburn Jr. of Kentucky; his best friend and mentor, Doug Koontz of Warsaw; several cousins, including Michael (Hollee) Ramey of Ft. Wayne; and many dear friends.
He was preceded in death by his grandfather, Thomas Blackburn Sr., great-grandmother, Margie Kincaid, and great aunt, Marian “WeWe” Meadows.
Visitation will be from 1 – 6 PM in the Community Full Gospel Church 915 E. Jefferson Street in Plymouth on Sunday, February 8, 2015. Funeral services will immediately follow in the church at 6:00 PM.
Burial will be at 11 AM on Monday, February 9, 2015 in the Culver Masonic Cemetery, Culver.
Memorial contributions can be made to the family.