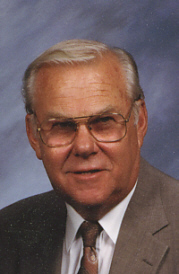 Lifetime Plymouth resident Jerry D. Greenlee, 73, has died following an illness. Jerry who was a former Marshall Co. sheriff, businessman and public servant, passed away on Friday, April 21, 2006 at 3:45 p.m.
Jerry died of a cancer related illness in his home, 241 Juniper Lane, Plymouth. His devoted family, along with many comforting friends and Hospice volunteers have provided for his steadfast care and continued prayers. A man of imposing stature, with the will to survive, Jerry never relinquished his gentle manner and quick sense of humor throughout his quiet suffering.
Born in Plymouth on January 6, 1933, Jerry was the youngest son of Harold A. “Hal” and Mildred H. (Feikert) Greenlee.
He graduated from Plymouth’s Lincoln High School in 1951. He played baseball, saxophone in the band and sang in the choir.
His true love and favorite sport, however, was football.
In 1950, a tackle, he was only the second Plymouth player – behind Redd Smith—to be named to the first team in the Indiana All State Football selections.
He went to Purdue on a football scholarship. His freshman year was a disaster: he had an appendectomy and tore up his right knee. He transferred to Ball State University, thinking that maybe he could get more playing time at a smaller school.
He promptly ripped up his knee again, ending his athletic career.
In April of 1953, during the Korean War, Jerry was drafted into the U.S. Army and spent 18 months in Stuttgart, Germany.
Back home, he worked for Bendix in South Bend for awhile before returning to Ball State.
In May of 1957, Harvey Phillips, then sheriff of Marshall County, made Jerry his deputy and a month later, on June 2, 1957, he and Jean E. Carpenter, were married in the Argos Methodist Church.
The following year, Jerry was nominated as the Democrat candidate for Marshall County Sheriff. At the age of 24 he was elected that November – the youngest sheriff in the State of Indiana. In January the Greenlees, in the middle of an ice storm, with their 3-month-old baby daughter, Debra, moved into the jail. They lived there for over four years.
Jerry ran for a second term and was elected handily in 1961, leading the Democrat ticket.
Two years into his term, with a wife and two little girls to support, making $8,500 a year, with no benefits, no retirement fund and no long term insurance, Jerry resigned to take a job at Weidner’s Canning Company with double the salary and all of the benefits. Robert Kirkley taught Jerry how to fly on Pi-Rod’s grass airstrip and became Weidner’s company pilot as well. Jerry also served as a Plymouth Volunteer Fireman.
He and Dale Hite were partners in Hite Equipment, which would become known as Contractor’s Equipment with Clyde Leary as an additional partner. Later he teamed up with Dick Flagg and Jerry became owner of the Tri-County Beverage, Inc. in Plymouth.
Involved in numerous civic affairs, he was co-founder of the Harvey Phillips Memorial Golf Tournament, he served as a Democratic Chairman and in 1992 he was elected and served four years as a Marshall County Commissioner.
Jerry was a lifetime member of the Trinity United Methodist Church, a member of the Plymouth Kilwinning Masonic Lodge No. 149, the Ancient Accepted Scottish Rite – Valley of South Bend No. 45, former Moose Lodge No. 741, American Legion Post 27 and Veterans of Foreign Wars – Marshall Co. Post 1162.
He was a life long Chicago Cub and Bear fan as well as a strong supporter of Purdue athletics.
While semi-retired, he ran the mowing crew for the County Highway Department up until May of last year when he was diagnosed with cancer of a kidney.
Jerry is survived by his endearing family; wife Jean, daughter and son-in-law, Kathy L. & James T. Smart. He was extremely proud of his five grandchildren; Megan, Kimberly and Kelly Rensberger all of Vancouver, Wash. and Matthew and Haley Smart of Plymouth. Two brothers; William (Ramona) Greenlee of Dayton, Ohio and Jack (Jenny) Greenlee of Plymouth and a sister Sue (Larry) Chase of Valreco, Florida along with many nieces and nephews.
He was preceded in death by his parents and a daughter Debra A. (Greenlee) Rensberger.
In accordance with Jerry’s wishes, cremation has taken place and in lieu of flowers memorial gifts may be made to the Center for Hospice and Palliative Care, 112 S. Center St. Plymouth, Trinity United Methodist Church, 425 S. Michigan St. Plymouth or to the Donor’s Choice.
The family will receive friends on Sunday, April 23rd from 3 – 6 p.m. in the Johnson-Danielson Funeral Home, 1100 N. Michigan St. Plymouth. Family services will be held and burial of ashes will be in the New Oakhill Cemetery, Plymouth.