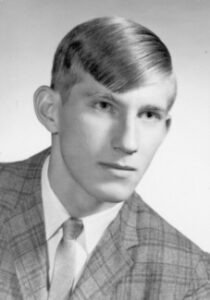 Jerry Lee Hummel, 63, passed away due to natural causes in the early morning hours on Saturday, April 7, 2012, at the 21-acre hobby farm he had called home for nearly 39 years. He had fought stubbornly in the recent past against the aftereffects of a severe stroke, and was determined to overcome just as he had throughout his life before our gracious Lord called him away.
Born premature in LaPorte on December 22, 1948, Jerry was the first-surviving son born to Clyde E. and Margaret Berry Hummel of LaPaz. Weighing in at only 4 lbs. 6 oz., his parents used men’s handkerchiefs as diapers and cradled him in a shoebox during his first month.
Despite his small stature growing up, Jerry quickly learned how to fend for himself—whether that was against the mothering of his older sisters or the threat of the neighbor’s infamous goose with a big stick.
Upon graduation from LaVille Junior/Senior High School in 1967, Jerry followed in his father’s footsteps by starting on a path to become a professional painter with the Painters and Decorators Union Local 1118 of South Bend. After working three years and with his journeyman’s card in hand, he took Ellen Myers of Plymouth to be his bride on August 28, 1971, at Trinity UMC, with the two settling later near Walkerton.
Jerry worked for numerous contractors over the next 35 years and was most proud of restoring the Morris Civic Auditorium in South Bend and his projects at the University of Notre Dame, which included working on the Joyce Center, the Golden Dome and many of the football coaches’ offices.
When he retired in 2003, he had more time for his many outdoor activities. He greatly enjoyed nature and had a passion for gardening, hunting, fishing, and farming. He had a great love for animals—and with much encouragement from his children—took on a small petting zoo that would include at various times pigs, horses, cattle, rabbits, chickens, turkeys, quail, cats, dogs and pygmy goats. In recent years, he loved watching many deer and wild turkeys from his home’s countryside views. Jerry also served for several years as a fireman for the Polk Township Volunteer Fire Department, carrying on a multi-generational tradition that continues today through his son. He was a supporter of Marshall County 4-H and served on the Fairboard and as a project leader for the Polk Boosters on and off over a 22-year period. One of his proudest achievements was seeing his children win awards for their prize turkeys.
In his spare time, he enjoyed visiting with friends and was a member of the American Legion Post 385 of LaPaz and the Moose Lodge of Plymouth.
Jerry is survived by his loving wife Ellen of 40 years and their three children, Amanda (Brian) Bettag of Lafayette, Ind., Betsy (Nicholas) Loeks of Kalamazoo, Mich., and Daniel Myers Hummel of Walkerton; and grandchildren, Camden and Brody Bettag, and Lindsey Loeks.
Other survivors include sisters Dian (Alton) Hershberger of Union, Mich., Carol Dove of Plymouth, and Gwen (James) McGrath of Slidell, La.; brothers Rex (Theresa) Hummel of LaPaz and Wes (Marge) Hummel of Bremen; sisters-in-law Joyce (Morris) Roberts of Plymouth and Nancy Myers of South Bend; brother-in-law Tom (Kris) Myers of Plymouth; and numerous cousins, nieces and nephews. He was preceded in death by his parents; sisters Sandy Hummel, Joan Roberts, Becky Leininger and Bonnie Porter; brother Carl Hummel; and brothers-in-law Dean Dove and Morris Roberts.
Friends will be welcomed by the family from 3-8 p.m. on Tuesday, April 10, at the Johnson Danielson Funeral Home, 1100 N. Michigan Street, Plymouth. Funeral services will be held on Wednesday, April 11, also at Johnson Danielson starting at 10:30 a.m. Rev. Tamara Boggs, pastor of the Tyner United Methodist Church will officiate. Internment will follow immediately at Morris Cemetery on U.S. 6.
In lieu of flowers, memorials in Jerry’s memory may be made to the Polk Township Volunteer Fire Department, P.O. Box 135, Tyner, or the Marshall County 4-H – Poultry Program.