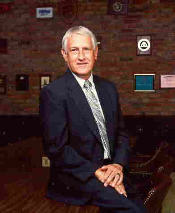 Local businessman Jerry L. Wyman, 69, who lived at 10139 Queen Rd., Plymouth, for the past 26 years has died. A 12-year resident of Culver and formerly of Warsaw, Jerry died following an illness, at 10:53 p.m. on Wednesday, August 15, 2001, in St. Joseph Regional Medical Center, Plymouth. Jerry was born in Warsaw, Ind., on Sept. 9, 1931. He was the son of Herbert and Theresa Hubler Wyman. He graduated from Warsaw High School in the class of 1950 and, later, from insurance training school. From 1951 to 1955, he served in the United States Navy on submarine duty. He was a member of the Warsaw American Legion. On Sept. 5, 1953, in St. Thomas’ Episcopal Church, Plymouth, Jerry and Beverly J. Ruff were married. He was employed in the insurance offices of the State Exchange Banks in Culver and Plymouth and later the Valley American Bank in Plymouth. He retired from the Morrow Insurance Agency in 1997. He loved to fish and would go anytime, to any place. An Indiana University and Notre Dame fan, he enjoyed watching their sporting events. He never got enough golf. An excellent player, Jerry played as often as he could and was a valued member of the Plymouth Country Club. He often walked the course outside his door, barefooted. “ I love the feel of the grass and the earth on my feet,” he said. “ It is a communion with nature.” He attended St. Thomas’ Episcopal Church and was a member of that faith for over 44 years. He also was a member of the Plymouth Kilwinning Masonic Lodge. A man of strong convictions, Jerry served the community in many ways and was a stalwart supporter of many worthwhile organizations, serving on their boards and committees. Jerry is survived by his wife, Bev, and by a daughter, Kimberly K. Miller and by a son, Thad W. Wyman, all of Plymouth. A granddaughter, Courtney and Lauran Herrimann, also survives. Two brothers, Tom Wyman, Warsaw, and William Wyman, North Providence, R.I., Loretta Ruff, his mother-in-law and several nieces and nephews survive as well. Jerry was preceded in death by his parents and by Sally Wyman, a sister. A Memorial Mass to honor Jerry’s life will be held at 4 p.m. on Wednesday, August 22, 2001, in St. Thomas’ Episcopal Church, 412 N. Center St., Plymouth. Father John Schramm, pastor of St. Thomas, will officiate. Immediately following the Mass a reception for family and friends will be held in Bishop Sheridan Hall adjacent to the church. Interment will be in New Oakhill Cemetery, Plymouth. Memorial gifts in Jerry’s memory may be made to the Boys & Girls Club or to a charity of the donor’s choice.