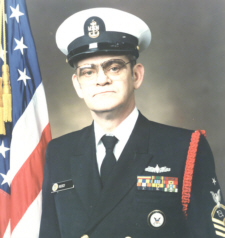 Jerry Wayne Reed, 67, formerly of Plymouth, died of natural causes at his residence in Washington, Ind., where he has lived for the past six years.
Born on August 13, 1940, in Washington, Ind., Jerry was the son of James and Autumn Dove Reed.
An Operations Officer of the United States Navy and a veteran of Vietnam, he had retired after 30 years of service to his country.
He enjoyed flower gardening, wood working and oil painting.
He was a member of the American Legion and the V.F.W. in Washington, Ind.
Two sons, William (Cynthia) Rackley, South Bend, and Jerry J. Reed, of Washington, Ind., and a daughter, Debra (Mark) Housand, of Osceloa, survive his death.
Seven grandchildren and four great-grandchildren survive his death.
Jerry is also survived by three sisters: Patricia Reed, Elkhart; Donna Brown and Tanya (Phil) Harmacinski, both of South Bend, and a brother, Jack (Cecilia) Reed of Lynnville, Tenn.
He was preceded in death by his parents and two brothers: James Reed and James Alfred Reed.
Friends are invited to visit with Jerry’s family and share memories of his life on Saturday, February 9, 2008, from 10 a.m. to noon, at the Johnson-Danielson Funeral Home, 1100 N. Michigan St., Plymouth.
Funeral services for Jerry will be held after the visitation at noon on Saturday in the funeral home. The Rev. Dr. E. Dean Fager, pastor of the First United Methodist Church, Plymouth, will officiate.
Burial will be in New Oakhill Cemetery, Plymouth, Ind.
Memorial gifts in his memory may be given to the Veteran’s of Foreign Wars.