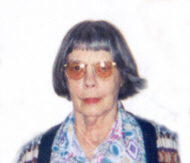 Jeruldene B. “Jerry” Miller, 83, a lifetime area resident, died at 9:55 a.m. on Thursday, April 7, 2005 in Memorial Hospital, South Bend, following an extended illness.
Born in Bourbon on October 30, 1921, she is the daughter of Clifford Carl and Ada M. (Dillingham) Brown.
Jerry is a 1939 graduate of LaPaz High School and a proud veteran of WWII. In the U.S. Navy she received her Licensed Practical Nurse’s training and finished second in her class. Following the war she continued to work as a nurse until which time she took a job at Wagner Wire.
She was married to John “Jack” Miller, they would later divorce and he preceded her in death in 1998, together they had three children. A person who loved the outdoors, Jerry enjoyed fishing, gardening and watching birds. She liked watching all types of sports and as a cancer survivor; she took great pride in walking in the American Cancer – Relay For Life for the past five years.
Jerry had attended the Wesleyan Methodist Church where she had been a Sunday School teacher and was a former member of the American Legion.
Surviving are her children; sons David G. (Marilyn) Miller of Plymouth, Dale L. (Linda) Miller of Midland, Mich. and daughter Joan A. (Kenneth) Clark of Argos. Numerous grand, great and great-great grandchildren survive with many nieces and nephews. A sister Betty Fairchild of Elkhart and sister-in-law Elizabeth Brown of Plymouth also survive.
Proceeding in death were her parents, a sister Velma Jean Everdon and three brothers; DeWayne “Bud”, Kenneth and Carl “Bill” Brown. Friends may visit with Jerry’s family from 3 – 6 p.m. on Sunday, April 10, 2005 in the Johnson-Danielson Funeral Home, 1100 N. Michigan St. Plymouth, and after 7 a.m. Monday where services will be held at 10:30a.m. Burial will follow in Grovertown Cemetery, Grovertown, Indiana with military honors accorded by the Veterans of Foreign Wars, Marshall Co. Post 1162.
Memorial contributions may be made to the American Cancer Society – Relay For Life.