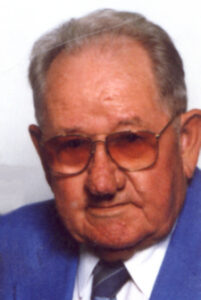 Jesse M. Smith, 90, 525 S. Michigan St., Plymouth, died of natural causes in Miller’s Merry Manor, Plymouth, on Saturday, January 24, 2009.
Jesse was the son of Iris B. and Chloe E. Brown Smith. He was born in Akron, Indiana, on May 27, 1918.
He attended Akron High School.
On September 14, 1940, Jesse and Myrtle V. Aldrich were married in Rochester, Indiana. Myrtle died in November of 2006. They had been married for 66 years.
Jesse served his country in the United States Army.
A machinist, he lived in Teegarden and worked at Edwards Iron Works in South Bend for 20 years and then, living and working in Sebring, Florida for almost 30 more years.
Jesse was a lifetime member of the VFW, and enjoyed wood working, fishing Jesse is survived by a daughter, Linda L. (Kenneth) Henry of Lexington, Kentucky, and by two sons: Ronald (Peggy) Smith, Plymouth, and Daniel L. (Janet) Smith, Walkerton, Indiana.
A brother, John D. (Mercedes) Smith, of Spain and a half-sister, Marilyn Johnson of Sebring, Florida, survive as well.
Five grandchildren, two step-grandchildren and six great-grandchildren also survive.
In addition to his parents and his wife, Jesse was preceded in death by an infant brother and Robert E. Smith, a brother.
Friends will be welcomed to celebrate Jesse’s life with his family from 10 a.m. to 11 a.m. on Tuesday, January 27, 2009, in the Johnson-Danielson Funeral Home, 1100 N. Michigan St., Plymouth.
Funeral services for Jesse will be held in the funeral home following visitation at 11 a.m. on Tuesday.
The Rev. Robbie Keck, pastor of the Teegarden First Brethren Church, where Jesse was a member, will officiate.
Burial will be next to his wife in the Morris Cemetery, LaPaz, Indiana.
Memorial gifts in Jesse’s memory may be made to the Teegarden First Brethren Church.