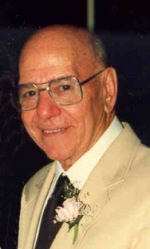 Jesse W. Heflick, 85, 12452 11th Road, Plymouth, known and respected as the sewing machine “guru” of the area, repairing and selling sewing machines, died of natural causes at 11 p.m., Sunday, March 23, 2003, in the St. Joseph Regional Medical Center, Plymouth.
Jesse was born in Plymouth, the son of Loftis Franklin and Nelle Edith Willard Heflick on April 21, 1917. He graduated from Tyner High School with the class of 1936.
He was first married to Mabel Thomas in Hibbard, Ind., on October 25, 1942. Mabel died on May 18, 1984. He and his second wife, Dorothy “Dottie” Gunther were united in matrimony in the First United Methodist Church in Plymouth on December 20, 1987.
For over fifty years, on October 23, 1952, Jesse opened the Heflick Sewing Machine business, first situated at 207 E. Jefferson St., Plymouth. Up until his death, he repaired machines for special clients.
He worked as a salesman at Montgomery Wards in Plymouth and retired, in 1981, after 34 years as a tool and dye maker from the Bendix Corp. in South Bend.
He owned and rode motorcycles and had a moped that he took his daschund, Nikki, in her basket, for rides around town. He enjoyed ice fishing in local lakes and taking kids swimming at Dixon Lake. A lifelong member of the NRA, he liked to rabbit hunt and belonged to Pathfinders, a Marshall County camping club.
A craftsman, Jesse worked with lanterns and did woodworking. He had a special love of people and served as a Scout Master of Boy Scout Troop 257.
He was a “super,super” neat individual, according to his wife, Dottie, and was very picky about the looks of his yard. A member of the UAW, the couple enjoyed going on outings twice a month together.
Jesse was ordained a Deacon of the Reorganized Church of Jesus Christ of Latter Day Saints (now Community of Christ Church), Hibbard, IN, on September 27, 1942. He was superannuated on March 28, 2001.
He is survived by his wife, Dottie, and three sons, a step-son and two step-daughters.
His sons are Jesse and Kathy Heflick, Jr., Delevan, Wis.; David M. and Cindy Heflick, Crescent City, Calif.; and Dale S. and Dorothy Heflick, Plymouth, Ind. Fred James and Valerie Gunther, Osceola, Ind., is his step-son.
His step-daughters are Cindy McDonald, Houston, Texas and Nancy M. and Skip Utz, South Bend, Ind.
Two special nieces, Adanelle and Tom Adams, South Bend, and Sheila and Jim Kuchel, Grovertown, also survive together with his only brother, Glen and Annabelle Heflick, Granger.
Eleven grandchildren survive as well. They are: Tad Heflick, Troy Heflick, Tara Trump, Trista Thornburg, Austin Heflick, Travis McDonald, Mark McDonald, Christopher Utz, Nicholas Utz, Nathaniel Utz and Nicholas Shane Gunther.
Five great-grandchildren also survive. They are: Bradie Thornburg, Kayley Thornburg, Justin Trump, Austin McDonald and Abigale Utz.
Jesse was preceded in death by his parents, his first wife, Mabel, two brothers, Donald Heflick and an infant brother and one sister, Bernice Gray.
A celebration of Jesse’s life will be held from 4 to 8 p.m. on Friday, March 28, 2003, in the Johnson-Danielson Funeral Home, 1100 N. Michigan St., Plymouth, Ind.
Elder James Wheeler, Pastor of the LaPorte congregation of the Community of Christ Church (formerly Reorganized Church of Jesus Christ of Latter Day Saints), will preside over Jesse’s funeral to be held in the funeral home on Saturday, March 29, 2003, at 11 a.m.
Burial will be in New Oakhill Cemetery, Plymouth.
Gifts in memory of Jesse Heflick may be made to a charity of the donor’s choice.