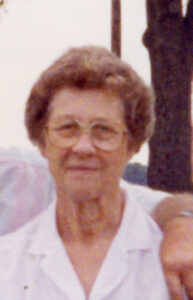 Jessie O. Price, 90 of Bourbon, died 7:27 p.m. on Thursday, November 6, 2008, in the Bremen Health Care Center, Bremen.
Jessie was born in Bremen, on November 19, 1917, the daughter of Edward F. and Ethel M. Dodd Walterhouse.
A Bourbon area resident all of her life, she had attended Bremen schools.
On New Year’s Eve, December 31, 1935, in the Bourbon Parsonage of the United Brethren Church, Jessie and Harold Price were married. Harold, after 67 years of marriage, died on September 10, 2003.
Jessie helped her husband Harold run their farm and also worked in Bourbon at Eby’s cookies. She was a member of the Country Church, Bourbon.
She was a wonderful cook, and enjoyed sharing her recipes with her family. Jessie was known to have a great sense of humor and she enjoyed playing cards with her sisters, once a week for many years.
Jessie is survived by a son, Charles E. (Judy) Price, Brownsburg, IN., and a daughter, Nancy Price of Bremen. Eight grandchildren, three step-grandchildren, 20 great-grandchildren, 11 step-great-grandchildren and a great-great grandson also survive.
Three sisters: Esther Wagoner, Bremen, IN., Ruth Fox, Wakarusa, IN. and Marian Tharp, Plymouth, IN., survive as well.
Jessie was preceded in death by her parents, her husband, and a daughter, Shirley Bailey Walters. Also three brothers, Harry, Gerald and Donald Walterhouse and two sisters, Helen Morlan and Mildred Jones preceded her death. Friends are invited to come and celebrate the life of Jessie Price with her family from 4 to 8 p.m. on Monday, November 10, 2008 and after 7:00 a.m. on Tuesday, November 11, 2008 at the Johnson-Danielson Funeral Home, 1100 N. Michigan St., Plymouth.
Funeral services, officiated by the Rev. David Gould will be held at 11:00 a.m. on Tuesday, November 11th, in The County Church, S.R. 331 N., Bourbon, IN, where friends may also visit for one hour prior to the services.
Burial will be in Mount Pleasant Cemetery, Bourbon, IN.
Memorial gifts in Jessie’s memory may be made to The Whitlock of Bremen or the Country Church of Bourbon.