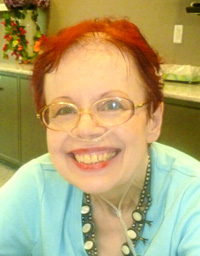 Jo Ann Walker Morrow, 65, formerly of Pittsburg, Pennsylvania, peacefully passed away at 4:15 p.m. on Thursday June 15, 2017 at Pilgrim Manor in Plymouth following an illness.
Jo was born in Plymouth, Indiana on April 28, 1952 to James Paul and Barbara Jean (Falconbury) Walker. She attended St. Michael Catholic Grade School and graduated from Plymouth High School in 1970. She earned some college credits. Jo Ann was a talented artist.
In September of 1970 she enlisted in the United States Navy and served as a Medical Assistant at Naval Hospital in Oakland, CA. She was Honorably Discharged on June 7, 1973. Jo then worked for the Army Civil Service in Germany as a GS-6 illustrator for five years until retirement in 1995. She had lived in Karlsruhe, West Germany for six years, Darmstadt, West Germany for three years, and after returning to the states, made Pittsburg her home for 25 years before returning back to Plymouth.
Jo is survived by her sister, Jeanne S. Walker and spouse Alan Ehrich, of Chicago, IL; a brother, John H. Walker of Plymouth; brother-in-law, Al Erich of Chicago, IL; nephews, Schuyler H. Mitchell of Plymouth and Ian C. Pope of Chicago, IL; and many dear friends.
She was preceded in death by her parents, brother, James W. Walker, and sister, Janet L. Walker.
Visitation will be held on Tuesday, June 20th from 5 â€“ 7 p.m. in the Johnson-Danielson Funeral Home, 1100 N. Michigan Street, Plymouth. A Rosary will be prayed at 7 p.m. in the funeral home.
Mass of Christian Burial will be held on Wednesday, June 21 at 11:00 a.m. in St. Michael Catholic Church, 612 N. Center Street, Plymouth with Fr. Craig Borchard officiating. Visitation in the church will begin at 10 a.m. until 11 a.m.
Burial will be in the Oak Hill Cemetery, Plymouth with Military Honors provided by members of the Plymouth American Legion Post 27, Veterans of Foreign Wars â€“ Marshall County Post 1162 and the D.A.V. Memorial contributions can be made to the St. Michael Altar Rosary Society, 612 N. Walnut Street, Plymouth, Indiana 46563.