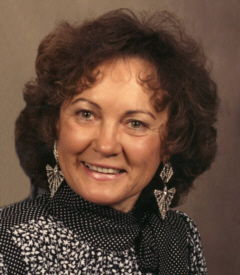 JoAnn T. Isban, 84, of Plymouth, Indiana, passed away peacefully at home in the company of her devoted husband, Leonard, and loving family on July 12, 2013.
She was born February 9, 1929 in South Bend, Indiana, to Helen and Sylvester Zell. As a graduate of South Bend Catholic High School, JoAnn was employed as an Administrative Assistant at the Studebaker Corporation. On September 11, 1948, at Holy Cross parish, she married Leonard Isban.
JoAnn was a homemaker who was devoted to her three children and her nine grandchildren, and reached out, on behalf of other young people, through her community involvements. Recognizing the need for a safe place for children to go between the time school is dismissed and working parents can return home, she and Leonard contacted the Boys and Girls Club of America, and in 1995 began the process of working with the national organization to create a facility in Plymouth. The Boys & Girls Club of Marshall County, with its current membership of over six hundred children, and thousands of children served since its inception, is a result of that effort. At different times, JoAnn was a Red Cross and a St. Joseph Hospital volunteer, a long time member of Tri-Kappa, and a lifetime member of Tri-Kappa Associates. An active participant in the arts and crafts program at the Boys & Girls Club, she also decorated shirts and sweatshirts, which she donated to St. Jude’s Children’s Hospital and the Eisenhower Medical Center of California. She was also committed to The Heminger House, dedicated to assisting victims of domestic violence, in Marshall County.
A loyal supporter of the University of Notre Dame, JoAnn was an ardent fan of the football and basketball programs, attending as many games as possible, even serving as an honorary coach during a women’s basketball game, which she would eagerly point out afterwards, ND won. Both she and Leonard were donors to the University’s Scholarship Program, Golf and Football Programs, and proud of the Isban Auditorium located in the Guglielmino Athletic Complex.
Athletic by nature, JoAnn was a very good golfer who spent many happy days playing golf with her family or in the Women’s 18 Hole League of the Plymouth Country Club. She was also an excellent card player and a lover of bridge, spending many enjoyable afternoons with her long time bridge group. JoAnn was the team captain of “The Golden Girls” in their ongoing double-bid euchre game against “The Silver Foxes.”
In 2012, JoAnn was the first recipient of the “Lovely Lady” award, presented by the Boys and Girls Club to honor a person”s service and support of their organization. Both she and Leonard were recipients of the “Sagamore of the Wabash” award from the State of Indiana for their community service and involvement. JoAnn is survived by her husband, Leonard, and her three children: daughters Jessica (Paul) Maich of Granger, Indiana; Susan (Gregory) Payne of Plymouth, Indiana; and son, Michael (Debra) Isban of South Bend, Indiana. JoAnn and Leonard also have nine grandchildren, including Emily (Chris) Killilea, Katherine and Hilary Maich; Kelly, Brittany, Davis, and Lily Payne; and Cole and Connor Isban. Extended family includes brothers Sylvester (Maryellen) Zell, Jr. of Detroit, Michigan, Ronald Zell of South Bend, Indiana, and sister Elizabeth (Betty) Klaybor of South Bend, Indiana, as well as many nieces and nephews.
Visitation with the family will be held at Johnson Danielson Funeral Home, 1100 N. Michigan Street, Plymouth, Indiana, from 3 to 8 pm on Wednesday, July 17, 2013. A Prayer Service will be held at 3 p.m. in the funeral home.
A Mass of Christian Burial will take place at St. Michael’s Catholic Church, 612 N. Center St., Plymouth, Thursday morning, July 18, 2013 at 11 a.m. with graveside services immediately following at New Oakhill Cemetery.
A luncheon in celebration of JoAnn’s life will then be held at Christo’s Banquet Center on Lincolnway East in Plymouth.
Donations in memory of JoAnn may be made to The Boys & Girls Club of Marshall County 314 E Jefferson Street, Plymouth, IN 46563 or St. Michael’s School 610 N Center Street, Plymouth, IN 46563.
The family wishes to express heartfelt gratitude for the kindness and competency of the many caregivers of Home Helpers, Center for Hospice Care of Marshall County, the nursing staff of St. Joseph Hospital, Plymouth, Indiana, Jennifer Criddle, and Dr. Craig Miller.