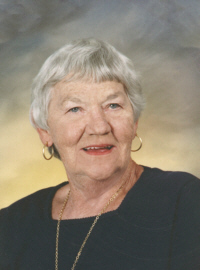 Joanna Hillman has come home.
The Plymouth-born native who had fought inoperable cancer of the breast and lungs courageously for over 2 ½ years, died at the home of her daughter, Jana, in Fort Wayne, Indiana, at 10:00 a.m. on Friday, November 4, 2005.
Joanna, a woman of courage and conviction, would have been 77-years-old in a few weeks. She had lived at 9914 Deer Trail, Plymouth, until the middle of October when, knowing that her death was near, she moved to Fort Wayne to be with her daughter for her remaining days.
“It seemed,” her daughter, Jana DePrey, said, “ that once her home was sold and her things disposed of, she was relaxed and at peace. Now she could go to her Lord with everything taken care of satisfactorily.”
Jana said that her mother told her two days before her death that “God had talked to her all night and told her that it was time to come home to Him.”
And so she did.
Joanna was born in Plymouth on December 15, 1928. She was the only child of Othel A. and Mildred F. Davis Knepper.
She graduated from Plymouth High School with the class of 1946. Her high school career was studded with many musical accomplishments. Blessed with a beautiful soprano voice, she also sang with a band for summer engagements at Tippecanoe Lake resorts.
After her graduation, she went to work in South Bend at the Roth Plating Corp. It was there that she fell in love, for the first and last time, with Merlin “ Mike” Hillman, an ex-Marine and the son of the boss.
The couple were married in St. Thomas’ Episcopal Church in Plymouth, on July 16, 1947.
The tragedy of their oldest child, Mikey, having Duchenne’s muscular dystrophy, was a heartbreaking catastrophe that changed her life.
After the sixth grade, as Mikey’s condition steadily deteriorated until his death at the age of 15, Joanna home schooled her son. Everyday she heard the teachers through an intercom from the classroom to Mikey’s bedside. She made up her mind that someday she too would become a teacher.
Her husband, Mike, was opposed to her plan to begin college. With no other choice, Joanna divorced him and started classes, both at Ancilla College and IUSB. She also took correspondence courses from Indiana University Bloomington, worked at a part time job at Derf Jewelers in Plymouth and took care of her home and her two other children, Jana and Gary, who were both in college.
On a fast track, she graduated in 1972 in just 2 ½ years with a bachelor’s degree in education from IUSB. Three years later, she earned master’s degrees in counseling and English from IUSB and I.U.-Bloomington.
Her first job was teaching English at Plymouth High School. After five years, she went to Oregon Davis Junior/Senior High School as a counselor, retiring in 1987.
In the meantime, in 1975, she and Mike had remarried. Each other. Mike died in 1997.
She was a 50-year member of the First United Methodist Church and sang in the choir. She was a past president of the Mother’s Club and kept the church’s books.
For years, during the Jerry’s Kids national telethons, it was Joanna’s number in Marshall County that you called to donate to the drive for muscular dystrophy research. She was a strong advocate for all kinds of handicapped accessibility and special needs programs.
She had been a member and soloist for the Order of the Eastern Star. A member of Delta Theta Tau sorority she served as past president of the alumni chapter, Zeta Zeta Beta. A member of the Retired Teachers’ Association, she grew magnificent roses, enjoyed swimming in her backyard pool and hosting neighborhood children who came to play. She was a wonderful cook and expert seamstress. She liked to read and always had a book nearby.
Joanna loved playing bridge with her friends, duplicate as well as party bridge. She had fun especially with a small group of ladies who regularly went out for dinner and cards. They facetiously called themselves, “The Drunk Bunch.”
Joanna adored her grandchildren and spent many hours sewing for her granddaughters and playing games and helping with homework with her grandsons. She almost always had a little lap dog. The last one was her dachshund Pepper. She is survived by her daughter and son-in-law, Jana and Ed DePrey, Fort Wayne, Ind.; and her son and daughter-in-law, Gary and Julie Hillman, Plymouth.
Five grandchildren and a step-grandson also survives her death. They are Erin Calhoun, Rachel Hillman and Brandon Hillman, all of Plymouth and Allison and Michael DePrey, both of Fort Wayne. Her step-grandson, Dustin Eads, is also from Plymouth.
Joanna was preceded in death by her parents, her husband, Mike and their son, Michael “Mikey” Hillman.
A celebration of the life of Joanna Hillman will be held on Sunday, November 6, 2005, from 3 to 7 p.m., in the Johnson-Danielson Funeral Home, 1100 N. Michigan St., Plymouth and continue after 7 a.m. Monday until time of services.
Funeral services for Joanna will be held at 1:30 p.m. on Monday, November 7, 2005, in the funeral home. The Rev. Dr. Dean Fager, pastor of the First United Methodist Church, Plymouth, will officiate. A tape of Joanna’s daughter, of whom she was so proud, singing her favorite selections, will be played during the ceremony. Burial will be beside her husband and son in New Oakhill Cemetery.
Memorial gifts in Joanna’s memory may be made to the First United Methodist Church or to the Muscular Dystrophy Association.